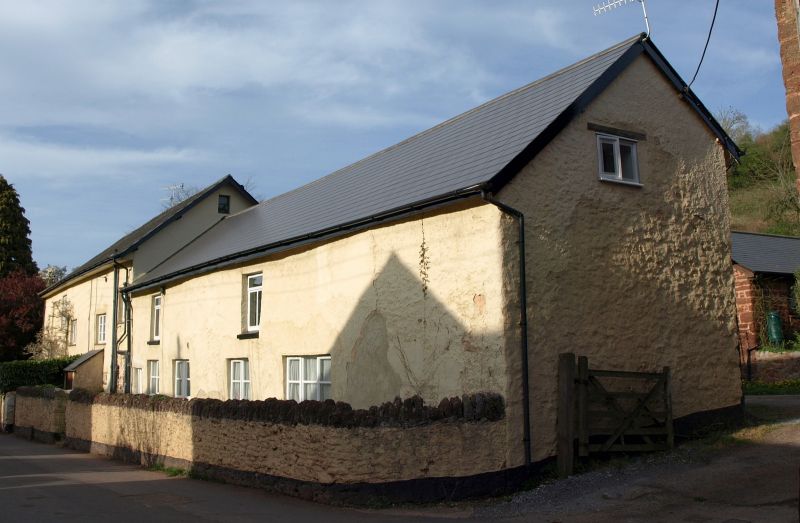 Entry Name: Higher Farm Including Cider Cellar to the South and Walls to the North and West

STOKEINTEIGNHEAD STOKE ROAD (east side),
SX 9070-9170 Stokeinteignhead
Higher Farm including cider cellar
17/413 to the south and walls to the north
- and west

Farmhouse including adjoining cider cellar and walls to garden to the north and west
and walls to narrow yard in front of the cider cellar. House probably a mid C19
extension and remodelling of an earlier house, cider cellar probably mid C19.
Colourwashed rendered cob and stone rubble: slate roof (2 different heights) hipped
at right end of north block. Axial stack to north block, projecting rear lateral
stack to service wing.
Plan: Overall L plan. The 2 principal rooms of the house face north, a rear right
service wing, parallel to the road and at right angles to the north-facing block
contains the kitchen, service rooms and the cider cellar. The kitchen, heated by a
lateral stack, and the service rooms are probably part of a C17 or earlier single
depth house, possibly truncated in the mid C19 when the new principal rooms were
added, and reduced to a service wing at this date. 2 entrances on the west side; one
into a passage which runs between the service wing and principal rooms, another
between the cider cellar and the kitchen.
Exterior: 2 storeys. Deep eaves. Asymmetrical 5:2 window west elevation, parallel
with Stoke Road (the 2 windows to the cider cellar, which has a lower roofline).
Front door with a C19 overlight to left of centre into the passage between the main
(north) block and the wing, recessed C19 panelled door to the extreme right of the
service wing. Scattered fenestration of probably C19 timber casement windows with
small panes, blind recess to first floor left. Handsome cider cellar to the right
with 2 first floor casements, a recessed door in a doorway with a timber lintel to
the left, and 2 unglazed ground floor windows. The north elevation, facing the
garden, has regular fenestration of 2 first floor and 2 ground floor C19 3-light
timber casements with glazing bars. The building is slightly set back from the road
behind rendered and stone rubble walls. The walls to the garden north and west are
tall, and capped with tiles. A lower stone rubble wall west of the west elevation
has irregular stone capping in front of the cider cellar.
Interior: Well-preserved. The open kitchen fireplace has a brick lintel: no exposed
carpentry to kitchen. C19 features survive in the principal rooms including joinery
and a chimney-piece. The cider cellar, still in use, has a pitched stone floor.
An attractive irregular range, group value with the cottages opposite and a fine
farmbuilding to the south, making an important contribution to the village
streetscape: the only working farm left in the village.