A Grade I Listed Building in Abbey Dore, Herefordshire, 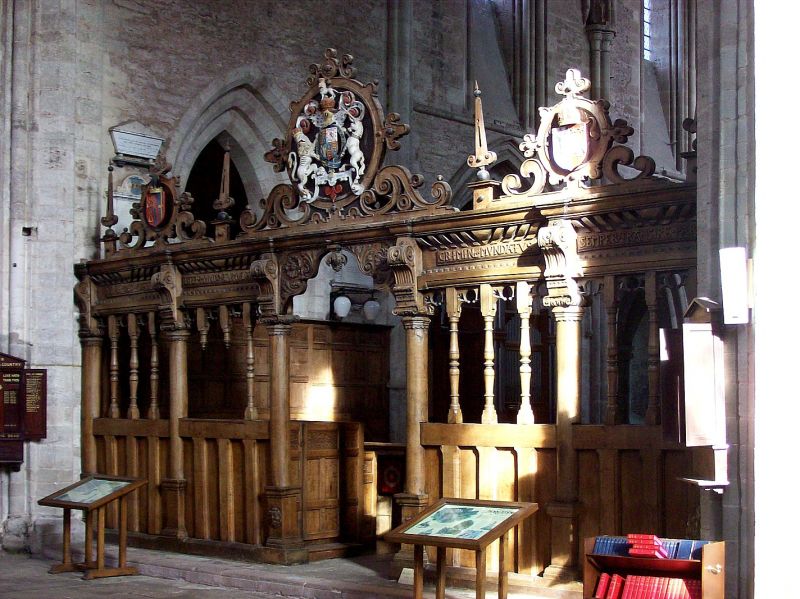 Transept has west elevation
with blocked 2-centred arch to crossing and single aisle arches, the former
containing a central 2-centred single-light C17 window, a small lancet above
scar of each nave aisle roof, outside each of which is a tall lancet, C17
corbel table; trumpet capital supported by decorative corbel on north nave
pier, waterleaf capital to western respond; south elevation has a pair of
very tall shafted lancets with waterleaf capitals surmounted by a vesica
window, all surrounded by deep roll mouldings and flanked by large buttresses
with off-sets, the right-hand one containing a newel with loop lights, two
lancets, probably C17 in gable-top; north elevation has high blocked doorway
of former night stair and C17 doorway at ground level in front of which are
remains of barrel vaulted sacristry and bases of shafts to corner of chapter
house. North and south aisles have 2:2 bays of chamfered lancets divided by
weathered buttresses with deeply moulded plinths and linked by billet-moulded
string which rises to gables truncated by C17 roof alterations. North doorway
set beneath diminished lancet in the third bay from the east has C13 plank door
with ornate strap hinges; east wall of ambulatory and former eastern chapel
is of similar design to the aisles with keel-moulded strings. Chancel has
single-light lancets to north and south, east wall has three stepped chamfered
lancets and two more lancets, probably C17, above lighting the roof space, C17
corbel table. Tower is embattled and of four stages, one central chamfered
lancet to first stage of south and east faces with similarly positioned round-
headed single-light windows to third and fourth stages, string course beneath
parapet, angle buttresses to south-east corner. South porch to left side of
south transept has quadrant braces to front tie-beam above which are V-struts,
suggesting a C17 date; rear tie has its underside carved away to clear door-
way and quadrant braces missing; the south-west post has an incised key-hole
pattern on its west side; side panels are roughly square and two panels high
to wall plate. South doorway has 2-centred deeply moulded arch, one keel-
moulding, dog-tooth hood mould and single attached shafts with stiff leaf
capitals; the door is battened and studded with two decorative wrought iron
strap hinges.

INTERIOR has roof with oak ceilings by Abel, incorporating
some re-used timbers from the pre-Dissolution roof; consoles on oak wall
shafts rising from C12 wall shafts which formerly supported vaulting to cross
wing and transepts, carry angle struts to moulded and chamfered ceiling beams;
wall plates are also moulded and chamfered; chancel roof, restored in 1902, is
similar but more elaborate with grotesque female consoles, carved angle struts
and acorn pendants; aisles, ambulatory and former five eastern chapels have
exquisite quadripartite vaults, the last two separated by four groups of
clustered shafts rising from dividing walls. Chancel has deeply moulded 2-
centred arches and 14 clustered shafts to piers dividing the east end into
three bays; the two eastern bays are in a similar style, whilst the western
bay has narrower and higher double chamfered 2-centred arches resulting from
the conversion of former inner transeptal eastern chapels into aisles;
magnificent water-holding bases, keel-moulded shafts and capitals with trumpet,
water-leaf and acanthus motifs; screen separating chancel from transept is from
C17 campaign and has four bays divided by Ionic columns, central entry, deep
cornice, strapwork decoration, and the Royal Arms of Charles I between those
of Scudamore and Archbishop Laud, dado has posts-with curved run-out chamfer
stops; stall and benches have early C17 panelling with arabesque designs;
contemporary hexagonal pulpit has two arcade devices to each face, strapwork
decoration and a tester; east windows have stained glass for Lord Scudamore,
dated 1634, the large central one depicting the Ascension; mensa with
consecration crosses is positioned on two sets of re-used clusters of shafts, C13 with
heraldic tiles to each side; early C17 communion rails with matching balustered
rails dividing chancel from north and south aisles and another rail of similar
design in front of C17 communion table and fragments of late medieval stained
glass in south-east chapel of ambulatory which contains a large trefoiled aumbry
in the north wall and numerous fragments from the nave including several C14
roof bosses, one depicting the Coronation of the Virgin. North and south aisles
each have a C13 recumbent effigy of a knight; the south aisle has a large dug-
out sarcophagus, two hatchments and two aumbries in the south wall each with a
2-centred head. Chapel to south of tower has trefoil-headed piscina with two
circular drains and to its right a trefoiled aumbry; between the two is a small
niche with a 2-centred head and fragments of medieval glass. Transept has C17.
doorway with 2-centred head and C17 door to newel of tower, dog-tooth surround
to rectangular cupboard with C17 panelled doors in south wall, C17 poor-box
and C17 chest, against the west wall is gallery, supported on four columns,
similar to those of the screen with panelled superstructure and balustered
stairs at south end, Royal Arms of Queen Anne painted on north wall to right
of doorway to former night stairs, several other wall paintings and wall and
floor monuments mainly C18; font has octagonal bowl with moulded underside
running down to plain octagonal stem, around its base are medieval floor tiles.
Scheduled Ancient Monument County number 185.