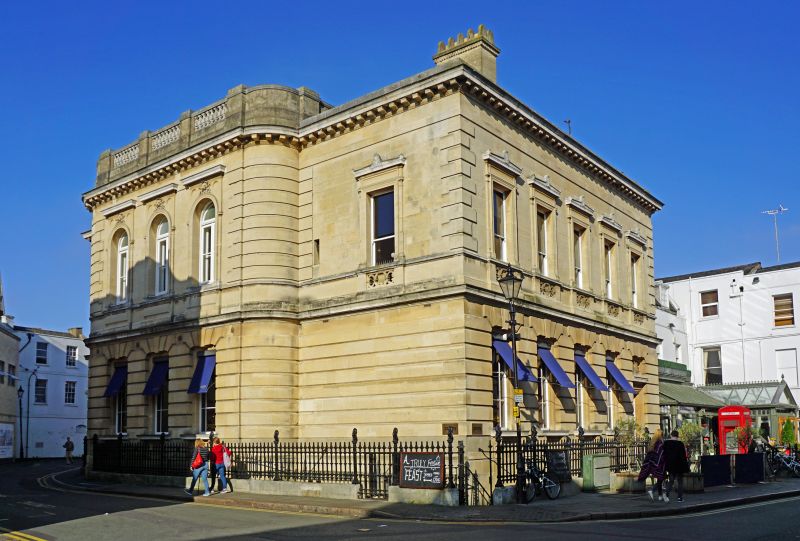 A court house with attached pier, wall and railings, in Italianate style, dated 1870 above the public entrance door. The architect was Thomas Charles Sorby and the building was constructed by E. Billings and Son of Cheltenham, with carving and plaster decorations by Messrs Mabey. The railings were supplied by Marshalls of Cheltenham.
MATERIALS: Postlip stone ashlar over brick, with Portland, Polyphant and Doulting stone dressings, and brick to the rear; the building has a slate roof and tall lateral stack, with cornice and acroteria off-centre left, and iron railings and gates with ashlar end pier.
PLAN: public stairwell to the north west has an apsidal end, and there is a central hallway; clerks' and bailiffs' rooms to ground floor; court room to centre of the first floor with jury and judges' rooms to first floor at the eastern side.
EXTERIOR: The building is of two storeys and basement, with four first floor windows to the main (southern) elevation; the wide western range has a rounded end, then a blind entrance bay breaks forwards, and three-window range stepped forwards again with a rounded end corner, and then a one-window bay set back at the eastern end. The wealth of ashlar detailing includes: banded rustication to ground floor drawn into raised voussoirs above openings; tooled first-floor band; quoins to first floor. First floor windows have tooled architraves bordered by slender colonnettes, frieze, and those to the three-window range have cornices with lion masks, that to right has shallow pediment with acroteria, all with aprons, those to right with circular motif; band, and acanthus modillion cornice. Ground floor windows have glazing bars and margin lights, and sills on corbels. The public entrance is via steps (with tiled upper step) to panelled and carved double doors with 'VR' carved on the upper part, with a stone panel over, all set within a Doric porch consisting of four pillars, and a frieze with triglyphs and metopes, cornice with triglyphs and metopes, and coat of arms above. To the western end is the curved 'apse', housing the principal public staircase, with banded rustication to ground floor and a tall, round-arched multi-pane staircase window, curved on section, with tooled architrave. The western return has two storeys and basement, and five first floor windows. The ashlar detailing is again prodigious: banded rustication to ground floor drawn into voussoirs over openings, ground floor windows with sills on carved corbels; first floor windows have architraves with aprons and frieze and shallow pediments; the rear part breaks forward with corner curved on section and surmounting balustrade. The judges' entrance is to the right, via an eight-panelled door in a tooled architrave.
INTERIOR: retains many original features including the narrow, open-well judges' staircase with paired fluted iron balusters and wreaths between, and the stone public staircase to the apse. The landing at the top of the public staircase has a dentil cornice, a ceiling frieze with fleurons and a central rose. There is a round-arched arcade to the top of stairs, with a central column and heavy, square section balustrade. Doors are six-panelled, with tooled architraves. The first floor retains its purpose-built court room, which is in two parts: the bench has panelling to dado with Corinthian pilasters and crowns; the recess to the rear of the bench has Doric pilasters and lion masks with swags to sides and frieze with swags over, and central arms in a cartouche; a deep dentil frieze extends around the whole room, and, to the court part is a modillion acanthus cornice. The court end of the room is top lit and has 'VR' to the frieze around the upper stage. At the public end of the room are two pairs of Composite columns with masks, and similar pilasters to responds. The door architrave has a frieze and pediment with acroteria. The judges' room and jury room have moulded cornices and retain their marble fireplaces.

SUBSIDIARY FEATURES: spearhead railings with stanchions surmounted by lions, running from a single tall pier, rectangular on plan with frieze and cornice, over a ramped, coped wall.

HISTORY: County Courts are local civil courts, established in England and Wales following legislation in 1846, to allow a national system for the recovery of small debts. They were derived from the Courts of Request or Courts of Conscience, which had been established piecemeal from around 1700 until their formalisation in 1846. The country was divided into sixty districts, in which one or more courts would operate. Each district had a judge who was an experienced barrister, and courts initially heard claims worth up to £20. Juries were made up of five individuals, and all verdicts had to be unanimous. Each court also had a clerk and sometimes an assistant; court servants; and at least one high bailiff, to serve summonses and execute all warrants and writs served by the court. Each court had a treasurer, who was authorised to build, purchase or hire buildings or land for the court if the current facilities were deemed insufficient. The Act of 1846 also allowed for the position of surveyor of County Courts; this post, abolished in 1870, was held first by Charles Reeves, and from 1866 by Thomas Charles Sorby, the architect of Cheltenham County Court. Cheltenham County Court was built 1869-71, and was little altered in the ensuing decades. The County Court Act of 1888 increased the size of the jury from five to eight. This made the jury box at Cheltenham insufficient, but rather than make invasive and potentially expensive alterations, the solution was simply to swap the positions of the jury and the press, which sat in purpose built boxes to either side of the courtroom. The court remained in use as a county court until the beginning of the C21, with partitions to the principal ground floor clerks' room having been introduced in the late C20.

SUMMARY OF IMPORTANCE:
Cheltenham County Court is a good example of a County Court in an authoritative Italianate style, erected following new legislation in 1846, which allowed a national system for the recovery of small debts. Designed by the then Surveyor of County Courts, Thomas Charles Sorby, and built in 1869-71, Cheltenham reflects the established style and layout of county courts developed by Sorby's predecessor as Surveyor, Charles Reeves. Unusually, it retains its court room largely unaltered and undivided. The building is of special architectural interest for its well-handled design and good degree of survival, despite its relatively late date and, by then, fairly typical layout.