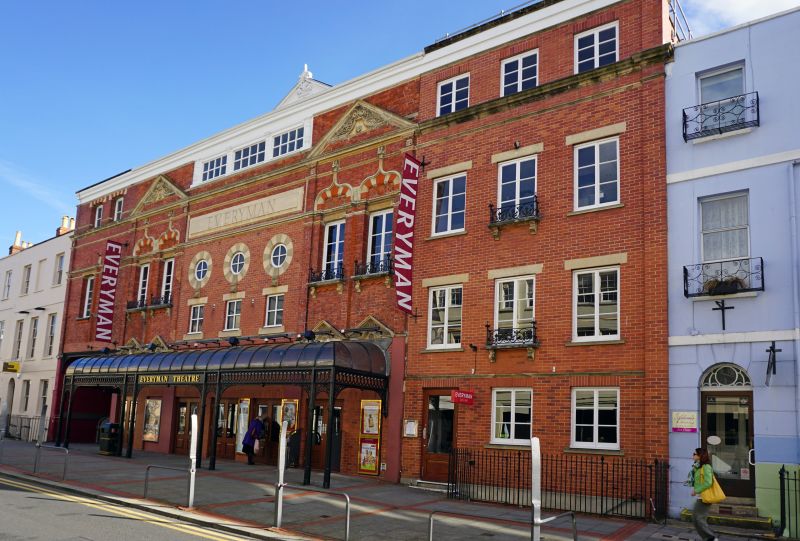 Theatre. 1891; with restorations and rebuilding to centre and
right c1980s. Architect, Frank Matcham. Red brick in Flemish
bond where original with ashlar dressings and terracotta and
concealed roof.
EXTERIOR: 2 storeys, 5 bays. Facade articulated by pilaster
strips to ends and between bays through ground and first
floors, with moulded lintel band and cornice over first floor
windows (missing to right), depressed over windows to 2nd and
4th bays, with ogeed arches above voussoirs; moulded panels
with masks; further moulded string with plaque to centre
inscribed 'EVERYMAN'; moulded cornice as second-floor sill
band; pediments to second and fourth bays with ornate scrolls
to tympana. Ground floor has wide opening to left, otherwise
C20 glazed doors and mainly large windows. C20 casement
windows with tooled sills, those to second and fourth bays on
feet, except those to centre are surmounted by oculi. Attic:
outer casements and central tripartite window with 1/2 columns
between. Crowning ornate frieze and cornice, pediment set back
to centre has scroll decoration.
INTERIOR: a sumptuous and intact scheme with 2 galleries and a
further gallery set behind the upper one. Boxes at circle
level, shallow domed ceiling. Very elaborate rococo decoration
to fronts of galleries, and wood and plaster decoration to
boxes. Of principal interest for the interior, a good example
of the provincial work of one of Britain's two major theatre
architects.
Former No.10 listed on 1.4.82.