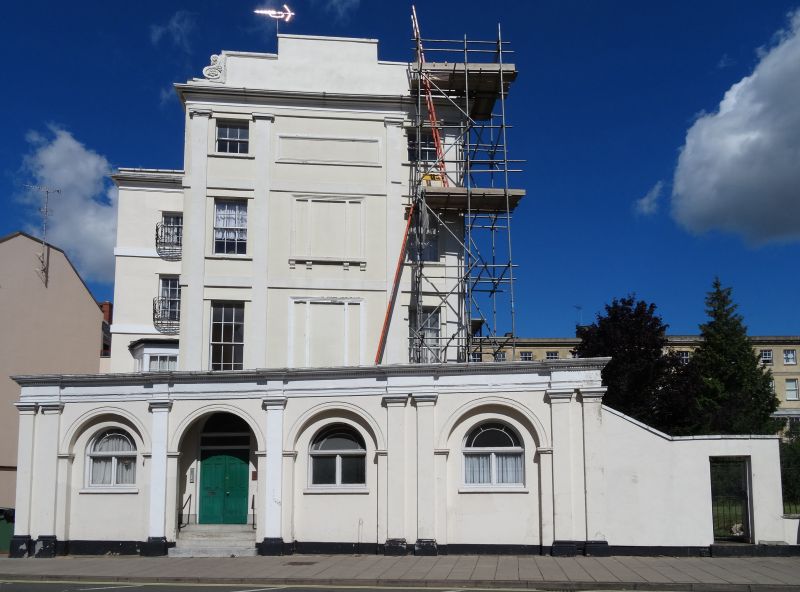 House, hotel, now flats. c1820-30, on Merrett's 1834 Map as
the Belle Vue Hotel, with later alterations. Stucco over brick
with concealed roof and wrought-iron verandah and window
guards, brick walls and ashlar piers. House set at an angle to
the street with a trapezoid-shaped porch.
EXTERIOR: 4 storeys, 3 first-floor windows with 5-window right
return. Stucco detailing includes: 4 Doric pilasters from
first floor through second and third floors, to ends and to
either side of wide central bay; second- and third-floor bands
which continue to returns; crowning architrave, frieze and
cornice; central end stack incorporated into feature with
upshots to either side with end scrolls. First and second
floors have outer 6/6 sashes, third floor has outer 3/3
sashes; to centre bay, first and second floors are blind
tripartite openings in tooled surrounds and with sills on
scrolled corbel brackets. To third floor is a central panel
with tooled surround. All windows in plain reveals and have
sills. Ground floor: 4-bay solid 'loggia' with flanking wall
to right, has 4 round-arches on impost capitals with tooled
heads and Doric pilasters between; entrance to second arch a
flight of steps to mid-C20 glazed doors, otherwise arcade has
casement windows with fanlights with margin glazing;
architrave, frieze and dentil cornice. Right return (garden
facade): 3-window range breaks forward. Ground, first and
second floors have 6/6 sashes, taller to first floor; third
floor has 3/3 sashes; all in plain reveals and with sills.
Crowning frieze and cornice.
INTERIOR: not inspected.
SUBSIDIARY FEATURES: first floor, garden facade has 2
verandahs with balustrades of concentric circles and
embellished rods, scrolls to uprights and scrolled frieze.
Walls adjoining to right surround lawned garden to approx 30m
square with piers to angles, square on plan with frieze and
shaped caps and renewed railings.

HISTORICAL NOTE: formerly the town house of the Hicks Beach
family. The Post Office Map of 1820 show a smaller, but still
substantial house on the site. I had become an hotel by 1845
when Rowe describes it in his Guid to Cheltenham (written in
1845 but published in 1850) as, `standing conspicuously a
short distance beyond the Baths. .. the international
accommodations are upon the best scale.' The proprietor was Mr
B Thomas, also a `Wine Merchant and Auctioneer'.
The garden facade forms a group with Nos 1-21 (odd) Berkeley
Place (qqv), the former gardens of which (now an open space)
it looks onto.
(Rowe G: Illustrated Cheltenham Guide 1850: Cheltenham:
1850-1969: 72).