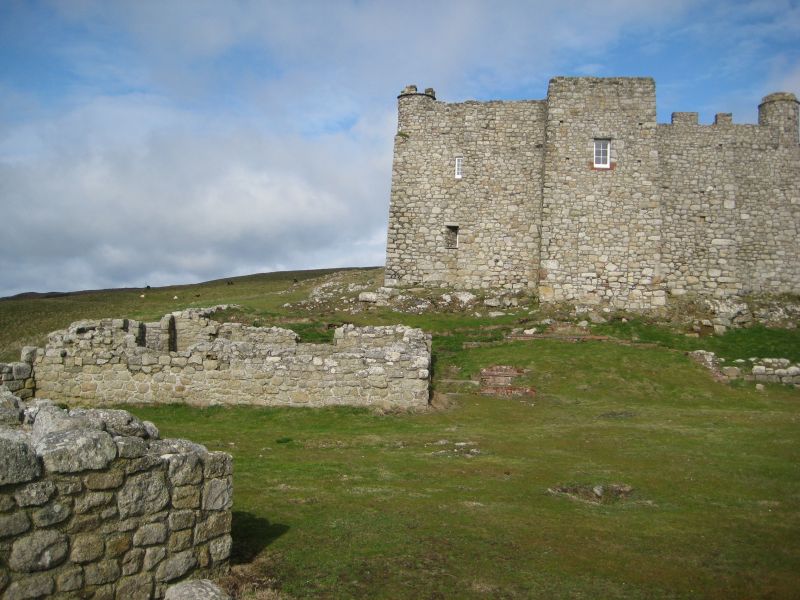 Castle keep and bailey walls. Built in 1243 by Henry III,
remodelled as cottages in circa mid C19 and again as holiday
cottages by Landmark Trust in late C20. Stone rubble, C20
corrugated sheet metal roofs inside walls. Keep is
approximately square on plan with projecting towers on east
and west sides. Inside the keep fishermen's cottages were
built in circa mid C19 against the outer walls on the
north-east and south sides. These cottages have been largely
rebuilt in the C20. In 1887 a lean-to outshut was built
outside against the north side of the keep to house the
terminal of the telegraph cable.

Exterior: The low square keep has slightly battered walls,
battlements and round turrets on the corners and as chimneys.
Projection at centre of east side with tower breaking
forward of centre. The entrance into the keep is through the
side of a projection on the west side. The walls of the keep
are blind except for a few small windows and putlog holes on
the east side. On north side an outshut (now cottage) with
lean-to corrugated asbestos roof. Inside keep the cottages
are 2 storeys and have C20 2-light casements with glazing
bars and brick lined openings.

Including bailey walls: remains of battered stone rubble
revetments to south, east and north east and fosse on
landward side to north west where gate was situated.

Interior: The interiors of the cottages are late C20.

Historical note: Marisco Castle was built in 1243 after Henry
III had executed William de Marisco in 1242 for treason. The
de Marisco family, who held Lundy from the C122 to 1321 were
pirates who terrorised this coast, but as reputed descendants
of a royal bastard they made claims to the throne. The
Castle was refortified during the Civil War. (Lundy:A and M
Langham).