A Grade I Listed Building in Sampford Peverell, Devon 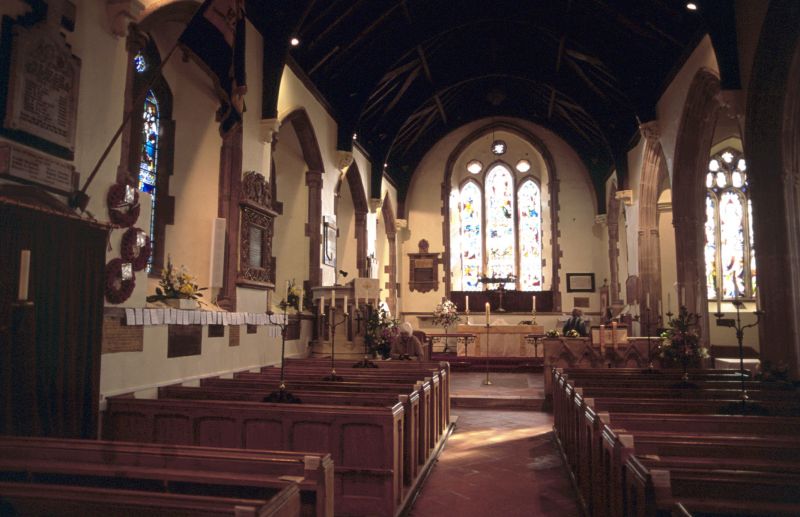 SAMPFORD PEVERELL HIGHER TOWN (north side)
ST 01 SW
Sampford Peverell
8/144 Church of St John the Baptist
-
5.4.66
GV I
Parish church. C12 font, church built in the mid C13 (it was first
consecrated in 1259), south aisle and porch built in 1498 at the cost
of Lady Margaret Beaufort according to the church guide, tower rebuilt
in 1815 and the rest restored in 1863 at the cost of the Reverend G W R
Ireland, organ and vestry added in 1870. Local red sandstone conglomerate
stone, coursed ashlar to the nave and chancel, neater ashlar to the tower,
rubble to the aisle and porch; Early English purple volcanic ashlar
detail, C15 Beerstone and C19 Hamstone detail; slate roof.
Plan: Early English nave and chancel under a continuous roof, late
C15 Perpendicular south aisle with porch at the west end under the same
roof, 1815 west tower replaced an Early English tower with spire.
Exterior: the tower is an interestingly early example of C19 Gothic. It
has 3 stages with diagonal buttresses and an embattled parapet with
corner pinnacles. It has 2-light belfry windows in Early English style.
West doorway is an unusual 2-centred arch with a moulded surround
containing a square-headed door with fanlight above containing cusped
tracery. Directly above is a worn plaque which originally commemorated
the 1815 rebuild, and above that a Perpendicular style window. The
clockface on the south side has a cusped hoodmould. 1870 lean-to
vestry against west end of the porch with Perpendicular detail. The
gable of the porch above the vestry roof is Beerstone ashlar, panelled
with sunken quatrefoils and containing a small window with carved lintel
At the left end of the south aisle is the large 2-centred outer arch
with moulded surround. Above it is one of the several Hamstone plaques
around the church commemorating the 1863 renovation. Above that a
cinquefoil-headed lancet. The rest of the aisle has restored 3-light
windows with Perpendicular tracery and hoodmoulds. The chancel and nave
contain volcanic Early English windows most with plate tracery. On the
north side a wide buttress (probably a former rood stair turret) marks
the break between nave and chancel. There is a north doorway, a recessed
pointed segmental arch with half-engaged shafts each side and hoodmould.
Interior: south door is a C19 replacement 2-centred arch with moulded
surround. Nave and chancel have a continuous roof. It and the aisle roof
are open with C19 arch-braced trusses and boarded backs. In the nave the
trusses spring from moulded Beerstone corbels whereas those in the
chancel have corbels carved with stiff leaf foliage. The chancel roof
also has single sets of windbraces. The tower arch is blocked with the
organ in front of it. No chancel arch. Tall 5-bay Beerstone arcade with
one overlapping the chancel. The piers are moulded (Pevsner's type B)
and there are moulded caps to the shafts only. Floor is laid with red
quarry tiles and includes some graveslabs in the chancel. The walls are plastered. The Early English windows have volcanic ashlar inner arches
with half-engaged shafts and moulded caps and bases and hoodmoulds.
There is a volcanic stringcourse around nave and chancel below sill
level. The aisle windows have chamfered Beerstone inner arches. The north
side of the chancel contains a volcanic double piscina with arcned heads
and pier with moulded cap and base. The double-headed niche on the south
side is thought to be the remains of an Easter sepulchre. The furniture
and fittings are mostly from tne 1863 renovation. Gothic style carved oak
reredos features a central panel featuring a representation of the Good
Samaritan. Oak communion rail on twisted wrought iron standards with
repoussee brackets. Oak choir stalls with linenfold panelling on the
fronts is dated 1959. Chancel also contains 2 richly-carved C17 oak chairs
Low Salcombe stone chancel screen carved on the front as a blind Early
English arcade enriched with marble shafts. A stone book rest on top
serves as a lectern. The Salcombe ashlar pulpit is in similar Early
English style. Nave and aisle have plain pine benches remarkable in that
they still retain brass candle holders on twisted wrought iron standards.
Late C12 Beerstone drum font containing 3 bands of ornamentation was
altered in the C19 and has a new base. C17 oak chest with carved panelled
front in south aisle.
Good monuments: north of the altar lies the very worn Beerstone recumbent
figure of a knight in armour said to be Sir Hugh Peverell who was patron
of the church in 1278. Above it a good marble mural monument in memory of Margaret Poulett (d.1602) includes a brass plate and is framed with carved garlands and symbols of death. In the nave a marble monument in memory of Margaret Collins (d.1655). The rest are C19, the best a marble mural
monument in memory of Elizabeth Dawbney (d.1809). Painted royal arms of
George I, dated 1722, in the tower. The church is remarkable for the
complete set of late C19-early C20 stained glass windows it contains.
These were made by Lavers, Barraud and Westlake, the best one at the east
end of the aisle.
It is rare for a church in Devon to retain such extensive Early English
fabric.
Sources: Church Guide, Devon SMR, Devon C19 Church Project.