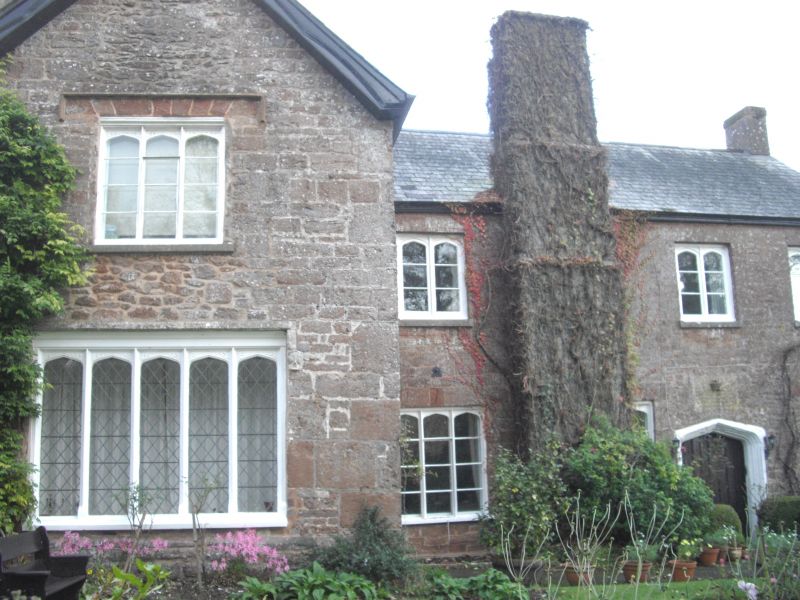 SAMPFORD PEVERELL HIGHER TOWN (north side),
ST 01 SW
Sampford Peverell
8/143 The Old Rectory including
- front garden walls
5.4.66
GV II*
House, former rectory and school, medieval priest's house. Early C16 (a
C19 datestone claims it was built in 1500), restored in 1851, alterations
of circa 1900. Original walling is coursed red sandstone ashlar but there
is extensive rubble patching, the C19 extension is brick; red
sandstone ashlar stacks and chimneyshafts; slate roof, maybe thatch originally.
Plan and development: L-plan building facing west-south-west, say west.
The main block, set back from the street, has a 2-room-and-through-passage
plan. At the right (south) end there is a small unheated service end room
now used as a kitchen. To left is the hall with a large projecting front
lateral stack and at the left (north) end a parlour crosswing which
projects forward and has an outer projecting lateral stack. The rear of
the passage is now blocked by the circa 1900 stairblock and there are
other contemporary service rooms to rear of the main block.
This house poses certain questions of interpretation and a good deal of
evidence of the original layout was removed or obscured in the C19. One
might expect the original house of circa 1500 to be open to the roof and
heated by an open hearth fire. However there is no definite evidence for
this. The hall roof dates from circa 1900 and tile parlour block roof is inaccessible. If the first floor structures and fireplaces were inserted
this took place in the early or mid C16. E.H.D. Williams reckons that
there was a small ante-room on each floor of the parlour wing and that a
blocked doorway at the east end originally led to a projecting newel stair turret. A photograph of the place in possession of the owners taken circa
1900 poses another problem. It shows the main range as a single storey
block lower than it is now although the hall chimneystack is much as it is
today. A single storey hall is inconsistent with the C16 ceiling inside.
Did the 1850 renovation remove an upper floor which was replaced circa
1900? Also the house is somewhat incomplete. The cutting of the Grand
Western Canal in the early C19 caused the demolition of the service
buildings and the present Rectory (q.v.) was built by the Canal Company in compensation. House is 2 storeys.
Exterior: irregular 1:3-window front of circa 1900 timber casements with
glazing bars and Tudor arch headed lights with carved spandrels. All have
stone ashlar flat arches over and those on the front of the parlour wing
have C19 Beerstone hoodmoulds, the lower one including late medieval
Beerstone label stops carved as human heads. This large ground floor
window contains diamond panes of leaded glass. The Tudor arch doorway on
the inner side of the main block looks like a circa 1900 doorway replacing
an earlier window. Above it is tiny original Beerstone lancet window. The
main doorway, right of centre in the main block is an original Beerstone
Tudor arch with moulded surround. It contains a C20 door. Directly above
is a C19 Hamstone plaque bearing a crown in high relief over the
inscription which reads; "Margaret Richmond Derby. House and School of St
John the Baptist. Erected 1500. Restored 1850. Prepare ye the way of the
Lord, make his paths straight." A Sun Insurance plaque is fixed to the
main block wall above the left window. Both blocks are gable-ended.
Interior: contains some high quality original or C16 detail. The hall has
a magnificent high ceiling, 16 panels of richly-moulded intersecting
beams. The moulded joists have been reset; 2 in each panel where there
were originally 3. Beneath the end beam against the passage is a moulded
oak cornice. Maybe most of the oak screen survives below. The parlour has
an 8-panel ceiling of moulded intersecting beams, each panel further
subdivided into 4 lesser panels. The eastern 2 main panels are slightly different; this may have been an anteroom. There is a crosswall directly
above. Main block roof of circa 1900. Parlour wing roof is a 7-bay ceiled
wagon roof with moulded ribs and purlins. A short section of the original crenellated wall plate survives. Both fireplaces are blocked and the
joinery detail is consistently C19.
The stone rubble front garden wall is mid C19 and once contained a tall
gateway with a Hamstone plaque over. This has been demolished but the
plaque has been reset at the right end in what is now a garage wall. It
has the arms of Margaret Richmond Derby in high relief. Margaret Richmond
Derby was Mary Beaufort, mother of Henry VII, who later married Lord Derby
She died in 1509. She owned the manor and added the south aisle to the
nearby Church of st John the Baptist. (q.v.)
Sources: Devon SMR. Ms. notes by Commander EHD Williams dated April 1980
and accompanied by measured ground plan in NMR.