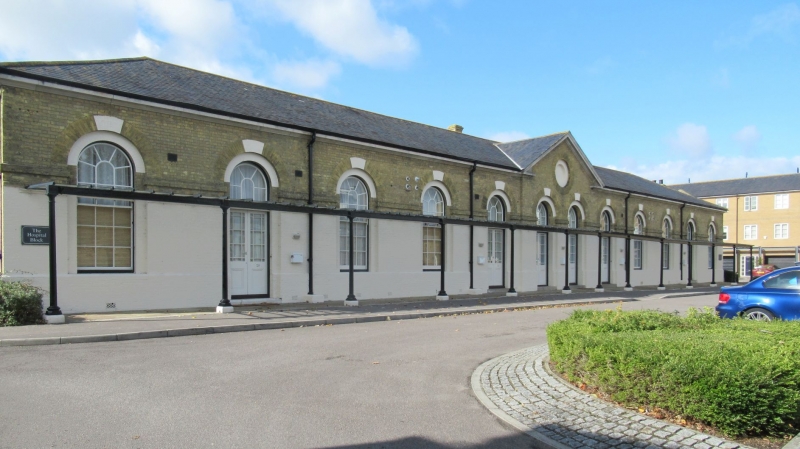 Hospital at infantry barracks; now disused. c1860. Yellow stock brick, painted front; end and rear lateral stacks and a hipped slate roof Italianate style. Rectangular single-depth plan with double-depth right-hand end. EXTERIOR: single storey, 2 storeys to right-hand end; 12-window range. Symmetrical front has an impost band to an arcade of round arches containing round-arched windows with metal frames and glazing bars, middle double half-glazed doors with margin panes beneath a small pediment with a blind oculus; a full-length verandah runs beneath the impost band with a flagged pavement, and moulded cast-iron posts to a raking roof. 2 storey N end has 2 flat-headed ground-floor 6/6-pane sashes and 2 round-arched 6/3-pane sashes in pedimented half-dormers separated by a lateral stack. The rear has 12 windows as the front, the N one obscured by a later addition, and 4 tall lateral stacks. INTERIOR: not inspected but noted as having 2 large cross-lit rooms either side of a central lobby from the entrance with large internal sash, and 2 rear fireplaces in each, blocked. HISTORY: a unique example of hospital planning; the ample ventilation, light and front access verandah suggest a reformed design anticipating some of the changes introduced by the pavilion plan. The barracks were a transit station for infantry, built after the Crimean War. This unique barracks and complete site, with the Lines earthworks, marks Gosport's importance in the defences around the Portsmouth dockyard. (Harfield A: The Gosport Barracks, sometimes known as "New Barracks": Gosport: 1988-: 16-21).