A Grade II* Listed Building in Hurley, Windsor and Maidenhead 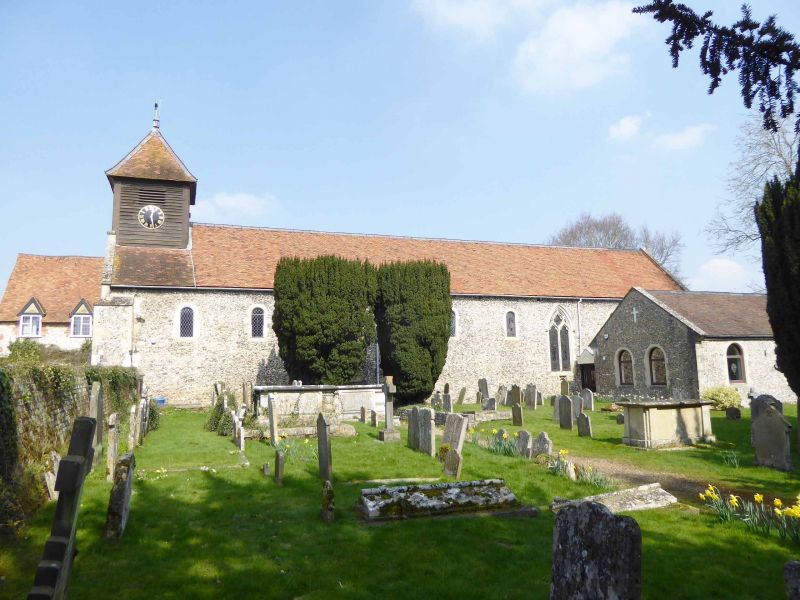 West end: round-headed doorway: C12, much restored, two orders, the outer order having elaborate chevron enrichment, and carried upon shafted jambs with scalloped capitals and quirked chamfered abaci, C19 hood mould. Above the doorway is a C19 round-headed window with C12 jambs. On the apex of the gable is a wooden bell turret with louvred sides and a tile hipped roof surmounted with a cross. Large clasping buttresses projecting from each corner.

Chancel, north side: three C12 round-headed windows with original splayed inner jambs. The easternmost window is blocked by The Cloisters (listed separately 17/10) adjoining on the north. East side: two round-headed windows with a small circular window above. These may be C12 but have C19 external stonework. South side: three windows, the two easternmost similar to those in the north wall and the third is early C14 with two trefoiled ogee lights with reticulated tracery under a pointed head. Below this window is a small ogee-headed recess, with sunk spandrels forming a square outline, with moulded jambs. To the right of this is a C19 priest's doorway.

Interior: fine early C15 octagonal font tapering towards the bottom with sides of traceried panelling with small buttresses at the angles.

Monuments: against the north wall of the chancel is an early C17 monument to John Lovelace of Ladye Place, d. 1558, and his wife d. 1579. It consists of a large strapwork panel, formerly containing an inscription; flanked by detached Ionic columns supporting an entablature above which is a second stage divided into three panels by small Doric columns. At the foot are two male figures dressed in Elizabethan costume.