A Grade II* Listed Building in Windsor, Windsor and Maidenhead 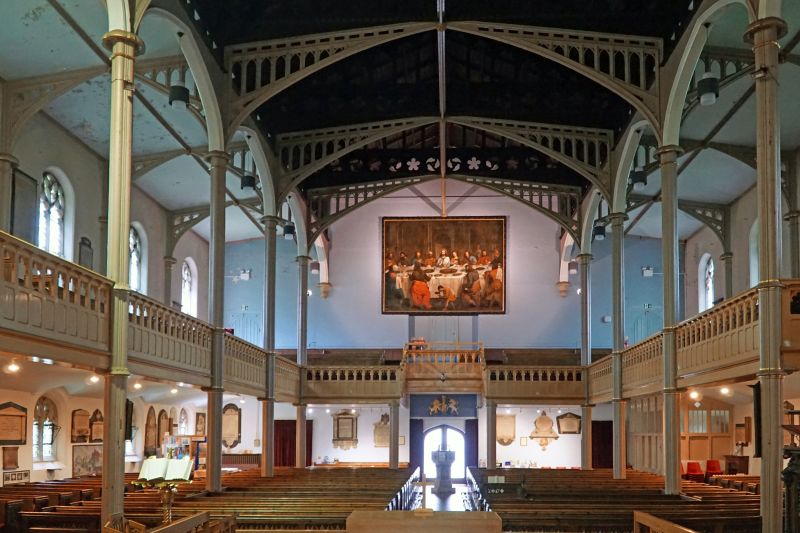 Rebuilt 1820-22 by Charles Hollis but with Jeffry Wyatt apparently as a consultant. Major restoration and chancel added 1869-73 by S S Teulon.

EXTERIOR: the west end presents a flat, tripartite elevation to the high street. In the centre there rises the west tower, of four stages with an entrance under a square-headed doorway on the ground floor with two think decorated bands above; then a stage with a two-light window under a square head; a clock stage with an unusual thin glazed band beneath the clock-face; and finally a tall, stately belfry stage. This has corner projections with a foiled cross-section which rise above the embattled parapet to tall octagonal pinnacles. The vestibules either side of the tower each as a west-facing entrance and above this a three-light window with plain cast-iron mullions and uncusped arches. The returns of the vestibules also have doorways and these have ogee hoods above them: above is a further three-light window to the same design as those on the west elevation. The parapets of the vestibules and tower have triangular-headed merlons to the battlements. The parapets to the nave, on the other hand, are plain. Along the side walls the bays are demarcated by buttresses with an offset halfway up. The windows are in two tiers of two lights with Decorated and Perpendicular stone tracery installed during the c1870 restoration: the lower ones light the aisles beneath the internal galleries and the upper one the space above them. The chancel, much lower than the nave, is built right up to the street running in front of the church. Its apse has tall two-light windows with flowing tracery in the early C14 manner. On the ridge of the chancel is a metal ventilator.

INTERIOR: the c1820 building, at 26m long by 18m wide, is a large, spacious building, made rather dark by the extensive stained glass and lack of a clerestory. Its dominant feature is the tall, slender cast-iron quatrefoil columns which rise to the springing of the roof. The nave and aisles are spanned by cast-iron trusses with arch-braces and traceried panelling in the spandrels. To the added chancel is a tall arch with a four-centred moulded head and, framing this, polychrome voussoirs. The chancel is highly embellished in High Victorian fashion, including barley-sugar columns at the angles of the apse which carry standing angel figures. More angels feature round the chancel at wall-plate level. Encaustic tiles cover the chancel floor. The nave and aisles have coloured tiles and the west end and stone further east.

PRINCIPAL FIXTURES: the east end has a series of mosaic panels by Antonio Salviati beneath the windows. In the centre these form a reredos depicting the Agnus Dei and Pelican in her Piety. The other faces of the apse each as a pair of panels with adoring angels. The royal pew south of the chancel has low screens to its two arches: they were carved by Grinling Gibbons for the chapel at Windsor Castle where he was paid for work in 1680-82. Two of the reliefs also depict the Pelican in its Piety and the third has foliage; this screenwork was given to St John's by George III. The screen in the chancel arch is of 1898 and was designed by Sir Arthur Blomfield.

In the body of the church the fixtures were renewed at Teulon's restoration. The stone pulpit has four open sides and has barley sugar columns which mirror the shafts in the chancel. The galleries were retained but were reseated and refronted, and new open benches with square ends were provided. The church has a large number of modest wall monuments, many of which were resited from the old church and date back to the early C17. Over the west end there is a large painting of the Last Supper, said to be by Franz de Cleyn (1588-1658): restored 2003. The organ is a large three-manual-and-pedal instrument by A. Hunter and Son, revoiced in 1936. There is an extensive collection of stained glass. The most recent work has been the installation of wooden staging at the east end of the nave for an altar.

HISTORY: before the early C19 the church consisted of a nave, chancel and aisles each under a separate gable and flush with one another at the east end. The condition of the building led to a proposal in 1881 to rebuild and the work was carried out in 1820-22 under the little known architect, Charles Hollis. Hollis had exhibited architectural designs at the Royal Academy in 1801-3 but after this no further references to him have been found until 1820 when his designs for rebuilding Windsor parish church were accepted: Jeffry Wyatt was also involved with this scheme, apparently as a consultant. The church was completed in 1822 and consecrated on 22 June by the bishop of Salisbury. Hollis also designed Windsor Bridge, consisting of three arches of iron, 1822-24, and the classical church of All Saints, Poplar, with its parsonage house, 1821-23. In the 1820s he was practising from various London addresses but his name then disappears from the London directories and his death in or about 1830 may be presumed.

Samuel Sanders Teulon (1812-73) was a well-known and active church architect who worked primarily for Low Church clients. His work is often made striking by the use of structural polychromy and exotic architectural details as here at St John's, one of his very late works.

St John's church is the product of two very different C19 schemes, one Georgian and one High Victorian. The c1820 church, with box pews and lack of a sizable chancel, was everything that Victorian clergymen and architects came to dislike, hence the thoroughgoing remodelling c1870. Teulon was noted for these radical Gothic 'recastings' of churches and the result is a harsh juxtaposition of two very different aesthetics.

REASONS FOR DESIGNATION:
The church of St John the Baptist is designated at Grade II* for the following principal reasons:
* It is a large, late Georgian church heavily remodelled in line with mid-Victorian taste.
* It is a very important example of the constructional use of cast iron for the nave arcades and the roof trusses.
* It has fixtures by some noted artists and architects from the C17 to the C19.
* It retains C17 and C18 monuments from the previous church on the site.