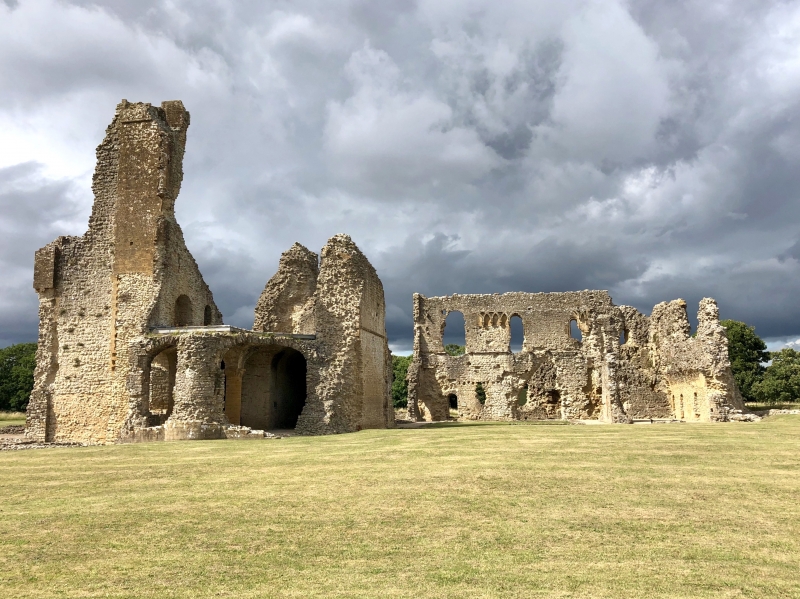 CASTLETON
ST 6416 SHERBORNE CASTLE
12/26 Sherborne Old Castle
11.7.51
GV I
Episcopal castle with curtain-wall and gatetowers. Built by Roger, bishop
of Salisbury 1107-1135. Restoration begun by Sir Walter Raleigh in 1592,
and soon abandoned. Castle partly demolished and rendered untenable, 1645.
Rubble-stone walls, with close-jointed ashlar facing and freestone dressings.
Curtain wall and gatetowers. Curtain-wall enclosed an area 470 ft by 330 ft
with diagonal walls across the angles, forming an elongated octagon. Walling
stands either side of the SW gatetower,in places on the north, south and east
walls. SW gatehouse, C12, 4 storeys with a battered plinth and clasping
buttresses. NW angle stands to full height, S side is more ruined. W face,
facing of the outer archway has gone and only the segmental rear-arch remains.
C16 restorations and alterations under Raleigh. (See RCHM). Present approach
to gate, C20. Abutments and central pier revealed by excavations. NW Tower,
foundations only. North gate and barbican, revealed by excavation, C12 and
C13. Flanking the C13 buildings are the remains of wing-works with circular
turrets at the outer angles. NE gate, foundations and some walling. SE tower,
site only. Keep and attached courtyard of buildings at the centre of the
bailey. Keep. C12, of at least 3 stages. Ground floor has a dividing wall
running N and S., and supporting two barrel-vaults. These barrels run on
into groined vaults, supported by a cylindrical column with a scalloped capital.
South wall of the extension has externally a central buttress of segmental form.
SW angle of the keep adjoins the S wall of the forebuilding, which stands to
the top of the third stage. The forebuilding has clasping buttresses at the
west angles. Late C16 stone staircase and terrace against north wall of
forebuilding. 3 ranges of buildings, and an excavated S range stand round
a central courtyard, originally with cloister-walks. W Ranges running N from
Keep, W wall has pilaster buttresses and a moulded string-course. E wall of
this range largely destroyed. Rubble (tufa) barrel vault. N range, 2 storeys,
4 bays, with clasping and pilaster buttresses externally. Ground-floors groined
rubble vault over 3 E bays and barrel-vault over W bay. N wall has remains of
former windows and openings upper floor round-headed windows decorated with
chevron, and label with billet. Internal wall-arcading of intersecting arches,
of which traces remain. Floor may have housed the chapel. East range, much
ruined. East hall has pilaster buttresses and an original window in each of
the 3 bays. Ground floor has a rubble barrel-vault of which the springing
remains. S range, foundations found of N and S walls, probably housed the
great Hall. The castle was held for the Crown in 1642 and 1645.
(RCHM Dorset I, p.64(4))(Sch. Monument: DORSET.2)