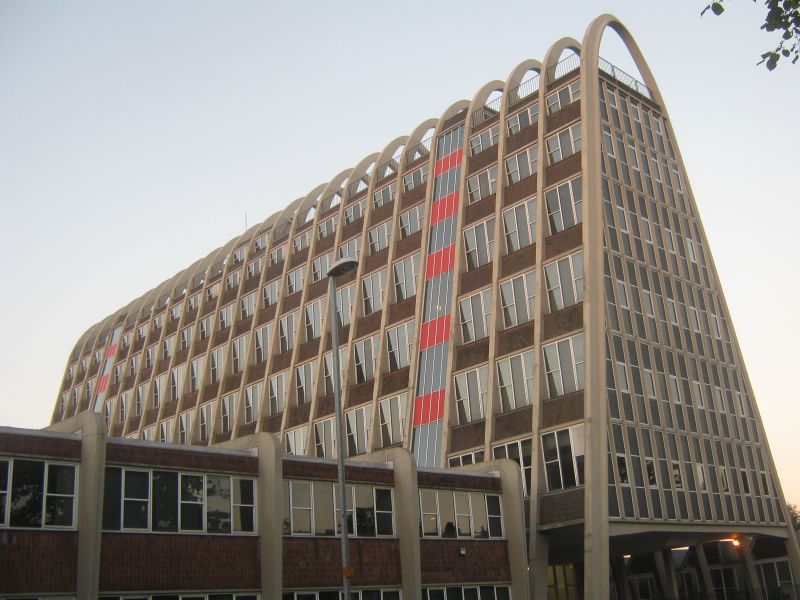 Includes: Hollings Building at Manchester Metropolitan
University OLD HALL LANE.
Educational building - formerly Hollings College. Built
1957-60. Designed by Leonard C. Howitt. Concrete frame with
brick infill to tower and restaurant block and glass curtain
walling to the workshop block. Flat roofs. Seven storey range
of classrooms with expressed hyperbolic paraboloid frame;
semi-circular restaurant block attached to the west and single
storey workshop block abuts to the east. Classroom block
decreases in width as it ascends, and the hypberbolic
paraboloid frame is expressed on the walls and is open as it
rises above the top storey (giving rise to the popular local
name `The Toast-rack'). Ground floor partly open. Original
slim white-painted window frames, single glazed. Brick
spandrels below. To west the semi-circular restaurant block is
externally two-storeyed with an expressed concrete frame of
boomerang-shaped members which rise up the walls, thickening
towards the top, and curve over the roof. Replacement UPVC
windows; brick horizontal strip spandrels. The centre has a
recent extra storey (under construction in 1995). Workshop
block has deep horizontal band of windows with original
vertical slim-sectioned white painted glazing bars; broad
panelled upstand above and red brick plinth. The restaurant
block was originally designed to serve meals made by the
students at the college to the public while the curved space
provided a cat-walk for the products of the tailoring
workshop. A distinctive and memorable building which
demonstrates this architect's love of structural gymnastics in
a dramatic way. It epitomises the popular values of the
Festival of Britain, as disseminated into regional
architecture.