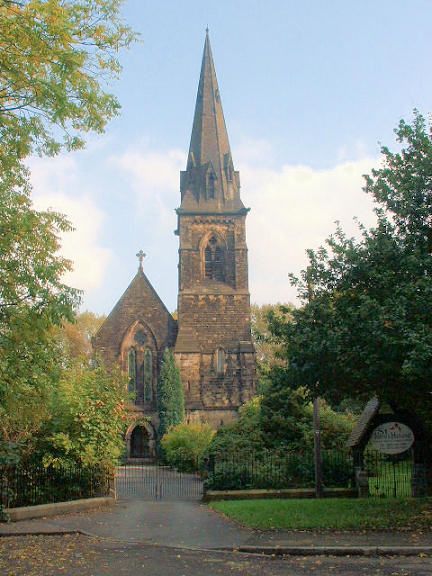 Church, now nursing home. 1845-6, by J.M.Derick; altered.
Coursed squared sandstone, slate roofs. C13 Gothic style. Nave
with south-west steeple, north and south aisles, chancel with
north vestry and south chapel on parallel axes. The 4-stage
tower has a weathered plinth, clasping buttresses to the first
2 stages, a set-back belfry stage with clasping corner
pilasters and corbel tables, and a broach spire with lucarnes;
a 2-centred arched south doorway with double-chamfered
surround and hoodmould, small cusped lancets to this and the
2nd stage, and louvred 2-light belfry windows with geometrical
plate tracery. The 6-bay nave has a 2-centred arched west
doorway with double-chamfered surround and hoodmould, a tall
2-centred arched west window with 2 lancet lights and a
quatrefoil in the head and a hoodmould, and a steeply pitched
coped gable with apex cross; and a pilastered clerestory with
an arcaded window of 5 cusped lights and a corbel table to
each bay. The aisles have low buttressed walls with 2 small
lancets and a corbel table to each bay (the 5th bay now
altered as a doorway). Chancel, chapel and vestry in similar
style. Interior not inspected.