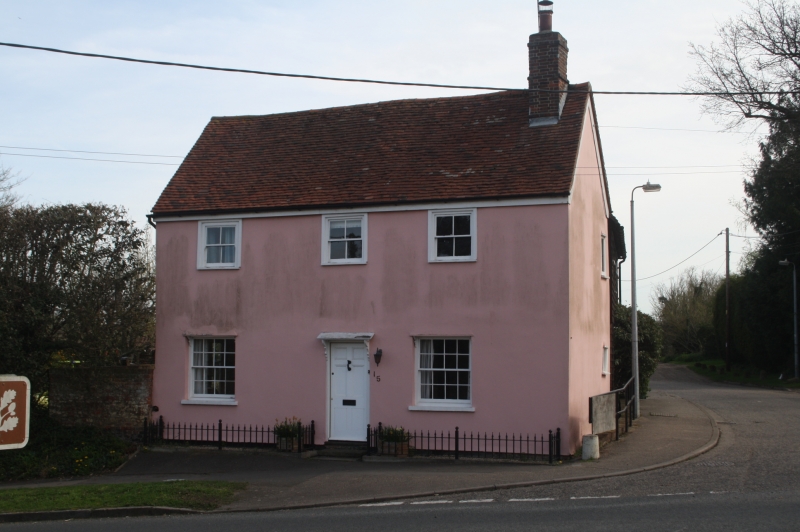 House. Late C14, altered in C19 and C20. Timber framed, plastered, roofed with
handmade red plain tiles. 3 bays facing W with C20 internal stack at right end.
Wing to rear, 1978, all weatherboarded. 2 storeys. Ground floor, 2 sashes of
early C19 type, of 16 lights. First floor, 3 late C19 sashes of 4 lights.
Central C20 6-panel door with small hood on profiled brackets. Chamfered
binding beams with step stops, plain joists of horizontal section jointed to
them with low-central tenons, in all bays. Widely spaced studs with curved
tension braces trenched to the outside. A former studded partition between the
left bay and the remainder has been removed at both storeys. On the ground
floor a wide gap between mortices at the front end, and a square rebate,
indicate that originally a door led through here into a parlour in the left bay.
The post to the rear is chamfered with step stops on the lower storey, rebated
on both sides on the upper storey, apparently for a door through to a solar in
the left bay. The posts are unjowled, except those of the open truss between
the middle and right bays, which are also chamfered, with 2 plain braces O.12
metre wide to the cambered tiebeam; mortices for missing braces to the binding
beam. Tenoned and splayed scarf in front wallplate. Crownpost roof with thick
axial braces; straight down-braces trenched into the right sides of the studs in
the closed truss; curved down-braces in the open truss. Collar-purlin missing
in right bay. Most of the rafters have been renewed. This curious building
does not correspond with any other known. Its position on the corner of Grange
Hill and Abbey Lane, both ancient, indicate that it can never have extended
further to the W or S. 3 unglazed windows in the rear wall, one with 3 original
diamond mullions, renewed sill and groove for sliding shutter, indicate that
there cannot have been an attached hall or service bay to the E. All the
structural features indicate an early date, at which time a fully floored and
unjettied small house was unusual. The position, between Grange Farm and
Coggeshall Abbey, and the high quality of the timber and carpentry, indicate a
monastic origin. The frame is illustrated and described by D.F. Stenning and
M.C. Wadhams in Historic Building Studies No. 1, Essex County Council, 1986,
28-30. The renovation of 1977-8 and the rear wing are by James Blackie.