A Grade I Listed Building in Coggeshall, Essex 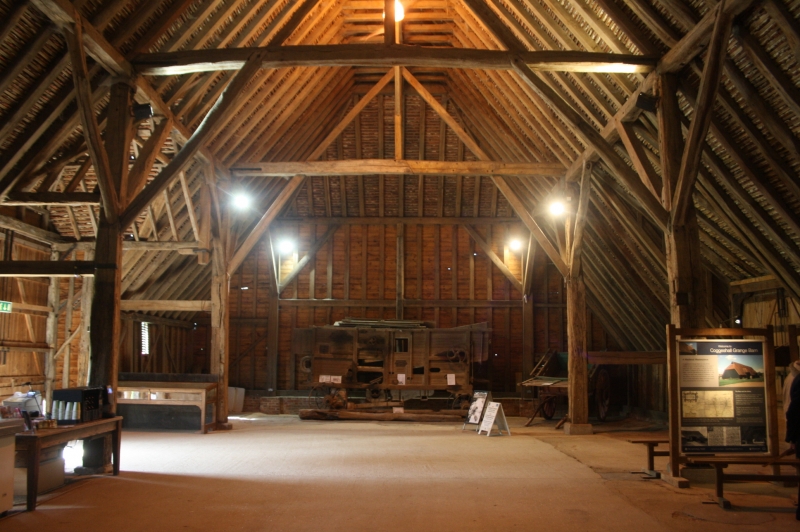 Barn. C12/early C13 origin, rebuilt in C14, altered in C18, restored 1984.
Timber framed, weatherboarded, roofed with handmade red plain tiles. 6 bays
aligned ENE-WSW with 2 aisles, and 2 midstreys to SSE, 36.57 metres long x 13.71
metres wide x 10.67 metres high. The main roof has a gablet hip at each end;
the midstreys are hipped. All the arcade posts except those in the left end
truss are original, tapering towards the top, unjowled, each with an oblique
trench near the top for a passing-brace, and the matrix of an open notched lap
joint near the base for a former strut to the aisle tie. The right front arcade
post has been rotated in the early rebuild. The front arcade-plate is partly
original, with one-half of an undersquinted splayed scarf with 5 face-pegs,
partly C14, with edge-halved and bridled scarfs, and partly new oak of 1984. 10
of the original straight arcade-braces, tenoned to the posts, are joined to the
arcade-plate with open notched lap joints, a method of assembly which is unique
in Britain, elsewhere confined to transverse frames. The front wall to right of
the right midstrey has widely-spaced heavy studs. The remainder of this wall
has been rebuilt to greater height in the C18, with primary straight bracing.
The midstreys are C18 additions, with primary straight bracing and clasped
purlin roofs with ridges. The rear arcade-plate is partly original, with 9
original straight arcade-braces similarly jointed, some repaired in 1984. The
rear wall has widely-spaced studs dividing it into square panels, each with 2
inserted thinner studs. The left end wall is entirely of 1984 except the
central post. The right end wall retains one original aisle tie, with a modern
strut below it re-fixed in the original notched lap matrices, and one original
passing-brace, repaired at the top. There are arched braces to the tiebeam (the
only curved members in the whole structure), and C14 girts and studs below. All
the original tiebeams have been replaced in the C14 rebuild, for they do not
exhibit trenches for passing braces, but 6 of the original straight braces have
been jointed to them with open notched laps, and 2 braces are tenoned. C14
crownpost roof with near-square straight axial braces and similar down-braces to
the tiebeams. Grange Farm is associated with Coggeshall Abbey, originally
Savignac, but Cistercian from 1148. The restoration of 1984 was undertaken by
James Boutwood, architect, and received an Europa Nostra Award in 1985. (C.A.
Hewett, The Barn at Grange Farm, Coggeshall, Essex County Council, 1971, and
D.D. Andrews and J. Boutwood, Coggeshall Barn, notes on discoveries made during
the 1983-84 restoration, Essex Archaeology and History 16, 1984-5, 150-3). RCHM
(Little Coggeshall) 5.