Church of St Cyriac and Julitta

A Grade II* Listed Building in Swaffham Prior, Cambridgeshire 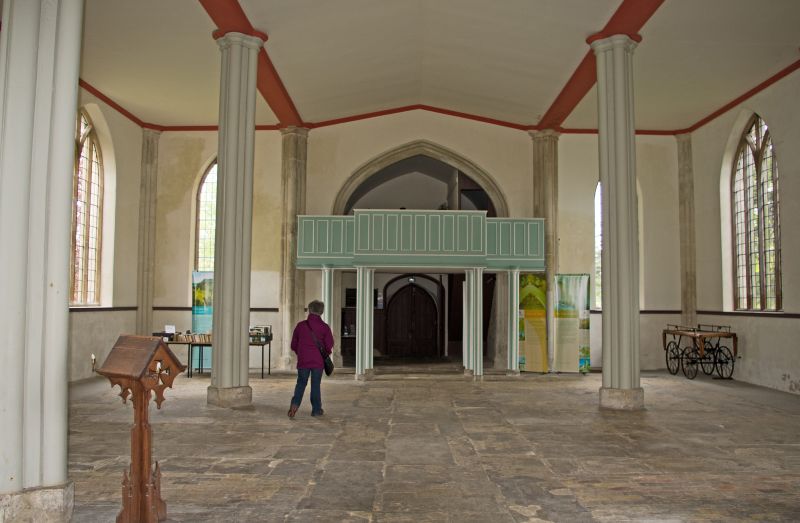 SWAFFHAM PRIOR,
HIGH STREET (East Side),
Church of St Cyriac and Julitta

Former parish church of C15 West tower, with early C19 nave, chancel, transepts. Except for the C15 West tower, the whole of the church was rebuilt c1805 to a design by Charles Humfrey of Cambridge. The church is now in the care of The Churches Conservation Trust. West tower, c1500, of rubble, clunch, flint with some limestone dressings to quoins, and door and window openings. In three stages, the ground and first stages being square but the bell stage is octagonal. The tower has a moulded plinth and a friezes of red brick and stone in chequer board pattern. There is a parapet with flushwork. The ground and first stage have two-stage buttressing, set diagonally and a newel staircase in the North East angle. The West doorway is of clunch in a two centred arch with a moulded label of limestone. Above, the West window has three cinquefoil lights with a transome in a four centred head. Each angle of the bell stage has a two stage pilaster buttress carried on a corbel carved with mask and other ornament. The bell stage has triangular weathering at its base. The bell chamber openings are of two cinquefoil lights in four centred heads. The rest of the church was rebuilt c1805 in gault brick with stone dressings to door and window openings. It is in Gothic style. The roof is slate and has an embattled parapet. There are diagonal buttresses. The nave is aisled and in three bays, and there are North and South transepts and a small chancel. It has a gallery at the West end. The parish was amalgamated with St Mary's in 1667.