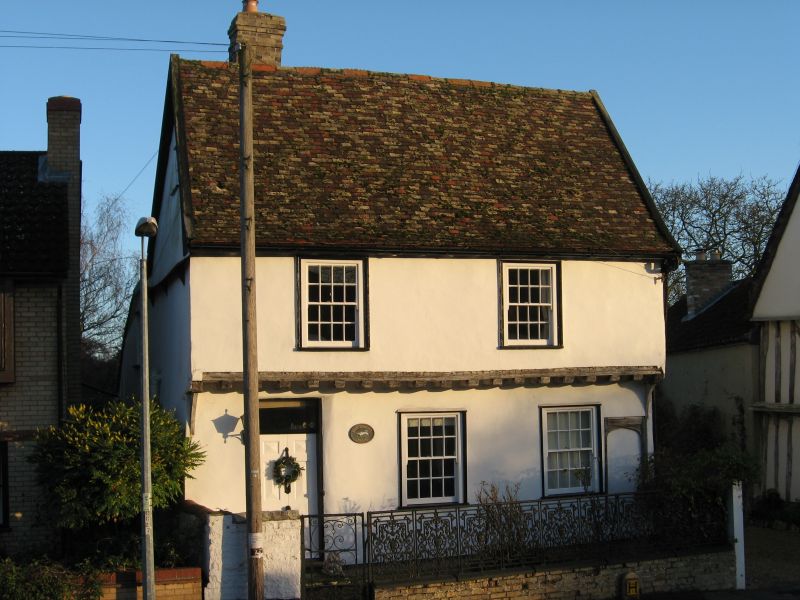 House, originally an open hall, early C15 with a C16 jettied
cross wing to the road. In early C16 the floor and chimney
stack were inserted into the open hall. Timber-framed, rendered
with Collyweston Stone slates and plain tiles. Hall
timber-framed, plaster rendered with a steeply pitched, tiled
roof with a ridge stack of clunch and brick. One storey and
attics. The fenestration is all C20, but the doorways, although
C20, are on the site of the original entries to the
cross-passage. Jettied parlour range to road, mid-late C16.
Timber-framed plaster rendered with a roof retaining some of the
original Collyweston stone slates at the front and plain tiles
at the rear. Two storeys. The jetty joists are moulded and two
of the original four jetty brackets survive. Two C20 windows on
site of late C18 or early C19 flush frame hung sashes at first
and ground floor and one doorway of similar period at left
hand. The blocked doorway to the right hand is reset and has an
unmoulded four centred arch in a square head. At the front are
cast-iron railings by Wilkinson of Ely, mid C19, in the form of
panels with grotesque mask heads at the centres. Inside. The
hall range retains the original cross-passage entries with
opposing doorways and two adjacent doorways leading to the
buttery and pantry. One of these service doorways has been
remodelled but the other has been exposed to show a four centred
arch in square head with the spandrels carved with foliate
ornament and one with a shield of arms and the other with a
bearded male head with a coronet, probably a king. The early
C16 floor is particularly fine with hollow and roll moulding to
both the main beams and the joists. The inglenook hearth,
contemporary with the ceiling, is of clunch. The roof was
originally of crown-post construction but only one end of the
tie beam to the display truss remains intact, the rest has been
removed. It has a double ogee moulding. Between the hall and
service bay, there is a closed truss with close studding and
curved downward bracing from a central post to the middle rail.
The interior of the parlour range was remodelled late in C18,
except for the first floor where the framing is visible. The
posts have jowled heads and the main beams are stop chamfered.