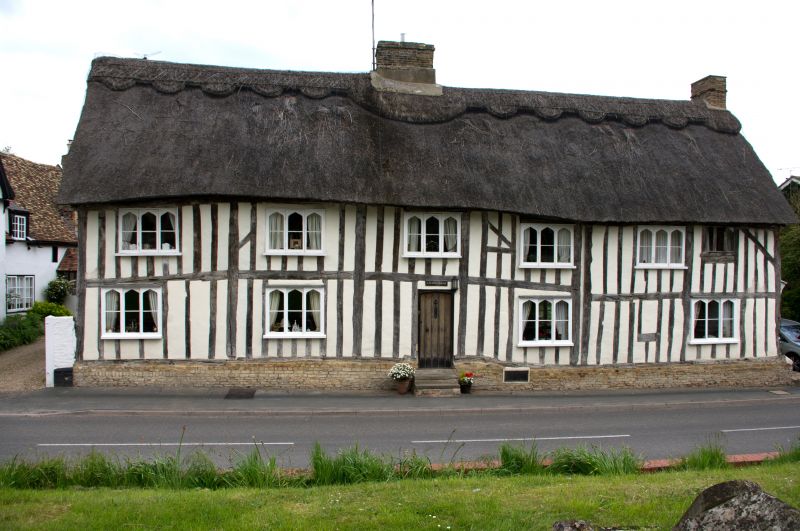 House, originally an open hall, c1500 extended by two bays to
South late C16. In late C18 the small kitchen or bakehouse wing
at the back was added. Timber-framing, exposed, with rendered
infill. Thatched roof of reed with a ridge stack of red and
yellow brick, c1600. Original plan of four bays with
cross-passage at left hand, converted to lobby-entry plan
c1600. Two storeys. Three Tudoresque windows with arched top
panes at first and, ground storeys, late C19. The doors are C20
but are in the original locations. At left hand gable end there
is a doorway, now blocked, to the service end and at the rear an
original hall window of five lights with diamond mullions, now
lighting a small closet at the side ofthe chimney stack. The
two bay addition at right hand is also timber-framed and
thatched. The end stack, contemporary with the extension, is of
similar brickwork to the stack inserted into the open hall. The
late C18 addition at the rear is of brick. Single storey with
tiled roof and end stack. Inside the framing is substantial and
intact except for one tie beam and part of the wall plate at the
front which have been removed. The roof is of crown-post
construction in four bays and five trusses. The crown-posts are
unmoulded and have cranked bracing, similar to that of the main
trusses, from the crown-posts to the collar purlin only. There
is no evidence of smoke blackening, but the display truss has
been partly mutilated where the stack has been inserted. There
is a closed truss in the roof between the parlour end of the
hall house and the two bay addition. There is no evidence that
the roof extended beyond this point. The posts to each of the
trusses are thickened at the heads and there is similar cranked
bracing from the posts to the tie beams. The tie beams have
plain stop chamfers. At first floor there are a number of
original shutter grooves to window openings, now blocked. There
is an original partition wall between the hall and service bay,
and this wall retains the two service doorway openings into the
cross-passage. There are two C20 doorways on the site of the
original back and front entries to this cross-passage. In the
gable end wall of the service bay is a blocked doorway retaining
its original arched head. The c1600 insertions include an
inglenook, now blocked or removed, a smaller hearth to the
parlour and an upper chamber. In the two bay extension there is
an inglenook and a smaller hearth in the room above. The main
beams of the ceiling in this part have stop chamfers of c1600.