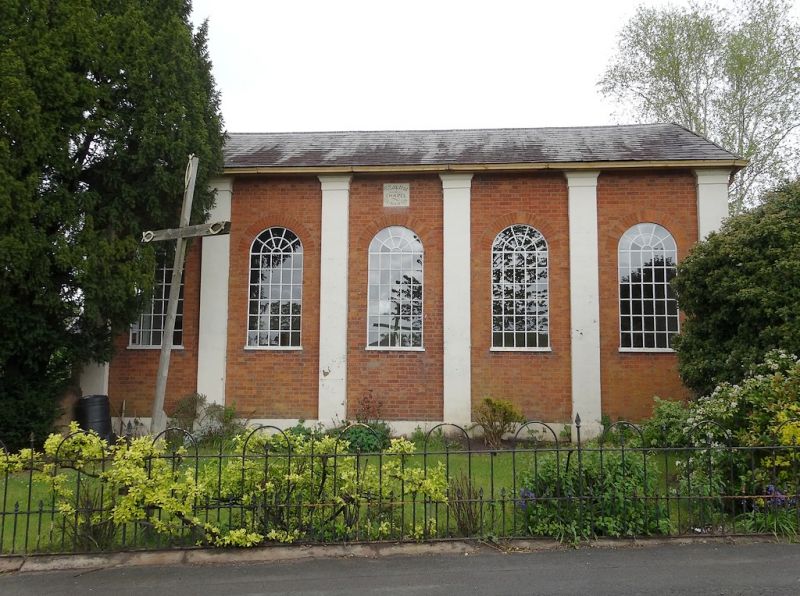 AUDLEM C.P. SANDY LANE
SJ 64 SE
8/12 Baptist Chapel (formerly
listed as Audlem Baptist
Chapel)
12-1-67
- II
Chapel. Dated 1840. Red Flemish bond brick with slate roof. Single
storey. Road front: five bays symmetrically disposed and divided by
rendered and painted brick pilasters, with rudimentary capitals.
Windows of 5 x 6 panes with round arched tops. Above the central
window is a rectangular datestone which reads Baptist/Chapel/A 1840 D.
The eastern end has three blank bays divided by brick pilasters which
are not rendered. The western end has three bays with rendered
pilasters and a central projecting flat roofed porch of later C19 date
with central double doors which have flush lower panels and raised and
fielded upper panels. To either side are round-arched window
openings, each with two round-arched lights and a circular light
above. To the left of this is a later baptistry of less height with a
3-bay front divided by brick pilasters and a central flat roofed porch
with Tuscan pillars. This baptistry extends along the length of the
northern side of the chapel.