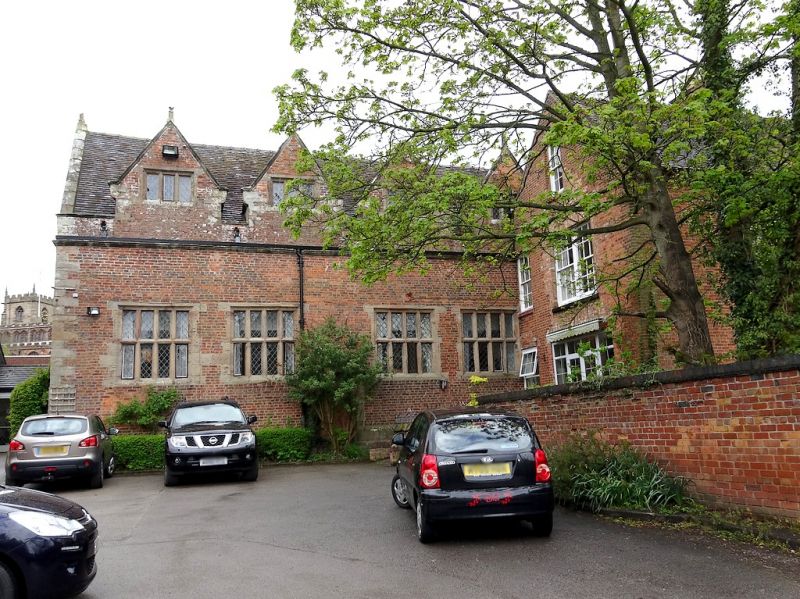 GV II*
School now nursing home. 1655 with headmaster's house of 1770 and C19
additions and alterations. Red English garden wall bond brick with
ashlar dressings and slate roof. Two and three storeys. Road front
facing vicarage Lane: to the left is a four bay portion of 1655. This
has an ashlar plinth with chamfered top and flush ashlar quoins to the
left hand corner and an ashlar string-course between the floors.
Doorway to the centre with a moulded ashlar surround and an arched
datestone above. To either side of the doorway which is now blocked
are 4-light windows with moulded ashlar surrounds, mullions and a
transom. To the first floor are 4 semi-dormer windows of 3 lights
with moulded ashlar surrounds, ashlar kneelers to the gables and
ashlar coping with sceptre finials. To the right of this is the 3-bay
headmaster's house of 1770 projecting forward and extending further to
the right than the range of 1655 from which it projects. This has
cambered headed windows to both floors with exposed sash boxes and
windows of 3 x 4 panes. Dentilled brick band to the eaves. The left
hand gable end is of 1655 and has flush quoins to the corners and one
4-light ashlar surrounded window to the ground floor and a 4-light
first floor window to the gable which has stone kneelers, coping and
sceptre finial. To the left of this is a C19 addition in the same
style with orange brick and stone dressings of 3 bays. To the centre
is a low gabled projection with a central 2-light mullioned window and
to the right is a 4-light mullioned window with 2 transoms and a
stepped sill and at left of centre is a 4-light window with mullions
and a transom both lateral windows being set in gables with stone
springers, coping and sceptre finials. The right hand side has
the gable end of the headmaster's house at left with 3 cambered headed
windows to each floor and one to the attic gable. To the right of
this and recessed is the gable end of the C17 portion which has two
3-light mullioned and transomed windows to the ground and first floors
and one similar to the attic with stone string-courses dividing the
floors and ashlar surrounds to the windows. The rear has a massive
brick chimney stack at left and to the right of this 5 gablets each
containing a three-light semi-dormer window with ashlar surround.
Ashlar kneelers, coping and sceptre finial to the gablets. The ground
floor, is masked by C19 additions.
Interior: The interior of the school room is now subdivided to form
bedrooms. To one room is an ashlar fire surround with a moulded
4-centred arch. The staircase of 4 flights with closed string has
square newels with ribbed corners terminating in faceted ball finials
save for one which continues to the roof. Moulded splat balusters and
an ovolo-moulded hand rail with a central fillet moulding to the top.
The attic has exposed timbers, the trusses consisting of principals
and a collar with purlins and a ridge. The school was endowed in 1655
by Sir Ralph Bolton and Thomas Gamull, two Merchant Taylors.