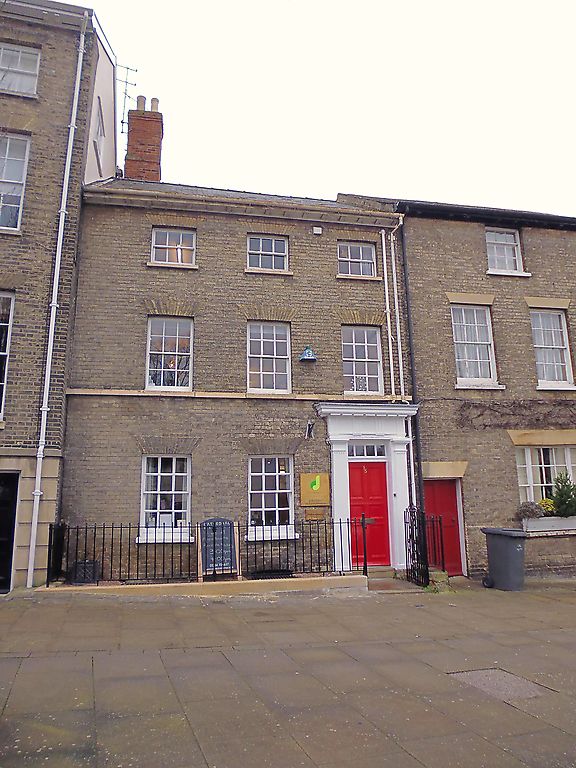 House, possibly including a shop, now used as a dental
practice. Early C17 core; C18 and early C19 extensions and
alterations. Timber-framed; fronted in white brick; slate roof
with modillion eaves soffit.
EXTERIOR: 3 storeys and basement. 3 window range: 12-pane
sashes in plain reveals with flat gauged arches to the ground
and 1st storeys; 6-pane sashes to the top storey. A raised
stone band runs at 1st storey sill level; stone sills to the
remaining windows. Entrance door on the right has a Greek
Doric doorcase with fluted pilasters, triglyph frieze and
mutule cornice. A 6-panel door with a rectangular fanlight. An
attached row of cast-iron railings with a gate.
INTERIOR: much altered, reflecting C18 changes on to which the
early C19 facade was superimposed. Cellar with features of
c1600: flint and brick rubble walling, rendered, ceiling with
chamfered main beam and joists on edge. One small square
stone-edged niche and an early C19 small-paned sliding-sash
window. Above ground, the oldest surviving feature is the
fireplace in the rear 1st storey room: this has a rounded back
to the hearth, and the bricks, which were formerly covered
with old render and are now stripped, have traces of original
red ochre colouring and lining; moulded and stopped jambs. The
main beams, in this room and elsewhere in the house, have been
hacked back for later plaster. C18 changes include the
addition of the top storey.
The roof has a ridge-piece and a number of re-used older
rafters, and also evidence of the early C19 changes when the
front was pushed forward and a further set of rafters laid
along the front slope. A corner chimney-stack was inserted for
the front rooms, and one attic room has a cast-iron grate in
'Gothick' style. An early C19 stair at the rear of the
entrance hall has stick balusters and a plain ramped handrail.
At the rear, a C19 cast-iron window with segmental-arched head
and unusual glazing-bars. The property has a good run of deeds
starting in 1691. A sale notice of 20 January 1826 lists the
rooms recognisably as entrance parlour, kitchen, sitting room
overlooking Angel Hill, 2 bedrooms, 2 attics, and a cellar.