The One Bull Public House 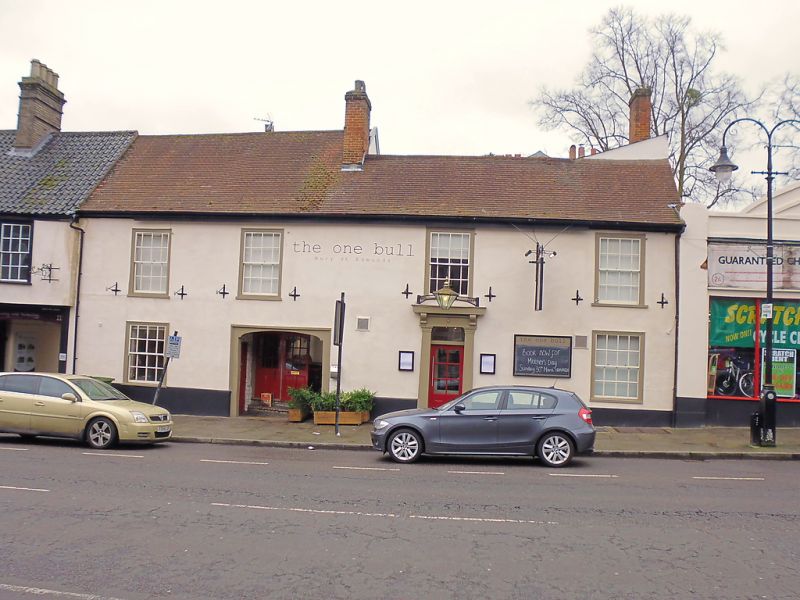 Public house. C16 core, with late C18 exterior and alterations
and extensive C20 modernising. Timber-framed and rendered; C20
plaintiles.
EXTERIOR: 2 storeys and cellars. Roof on 2 levels, the left
half higher than the right. An internal chimney-stack between
them with a plain shaft of old red brick and a rebuilt top. 4
window range: 16-pane sashes in flush cased frames; 2 similar
windows to the ground storey. An off-centre entrance, with
plain pilasters and a heavy flat pediment supported on console
brackets, has a C20 glazed door. On the left, a former entry
into a rear yard has late C20 infilling with recessed double
doors.
INTERIOR: heavily restored, with internal partitions removed
and few original timbers identifiable. One ground-storey beam
has ogee-moulding. A glazed roof over the former entry and
rear yard; an inn gallery to the rear range has replacement
Edwardian balusters in Jacobean style and is now behind a
glazed screen. The upper rooms to the right of the
chimney-stack have fragments of timbering exposed, none of it
prior to the C18, and the roof to this part is renewed. A long
tunnel vault below the former entry and yard, at right-angles
to the street, is lined with C19 brick.