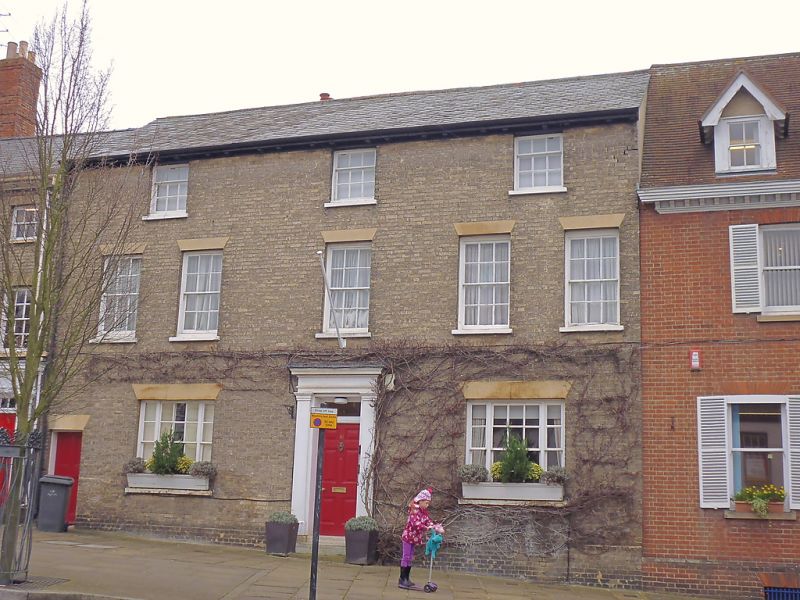 House, now offices. Early C19 front, C16 and C17 core.
Timber-framed interior, faced in white brick; slate roof with
paired bracketed eaves cornice.
EXTERIOR: 3 storeys and cellars; a front range with a rear
wing at right-angles and later extensions. 5 windows to the
1st storey, 12-pane sashes in plain reveals with cement flat
arches and stone sills; 2 tripartite windows to the ground
storey, 12-pane sashes with diminished side-lights, cement
heads and stone sills; three 9-pane sashes to the top storey.
The central entrance door, up 2 steps, has 6 raised fielded
panels, a rectangular fanlight and a doorcase with plain
pilasters and cornice.
INTERIOR: with some main beams and posts of the timber frame
exposed. 2 cellars: on the east side, a C19 cellar which
extends below the road; on the west, a C17 cellar below the
rear wing. This has an arch-braced tie-beam supporting the
ceiling, and one wall, which has the remains of a former
bake-oven, is of re-used stone blocks, including part of a
large column. Timber remains above the stonework seem to be
fragments of a pre-C16 building.
The rear wing, on a different level from the front, has had
its roof replaced by a single pitch which runs into the rear
slope of the main roof. In its end wall a cambered tie-beam,
chamfered and stopped, implies that the wing was initially
longer. An edge-halved and bridled scarf in one wallplate. On
the top storey the rear wallplate of the front range is
exposed, and one collar-beam indicates the roof-slope of the
original attic, raised to a full storey in the early C19 when
the house was refronted. A small C20 rear extension
incorporates a sash window of c1700 with heavy ovolo-moulded
glazing-bars.