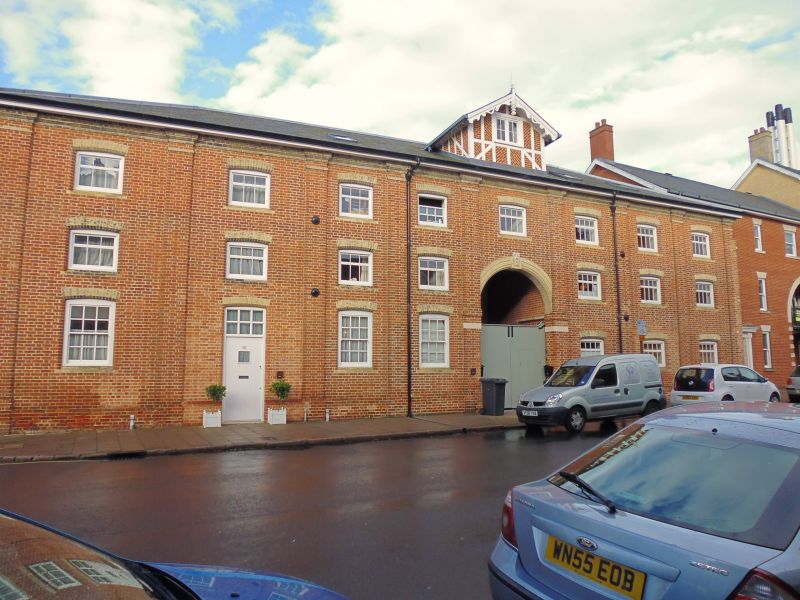 Maltings. Dated 1880 on a keystone above the entry which has
the initials EG & S (for Edward Greene and Son). Red brick
with white brick details; hipped slate roof. Corner site.
EXTERIOR: 3 storeys; the Westgate Street front is divided into
7 bays by plain brick pilasters. 8 windows, all but one
blocked, on the top storey, with plain reveals and shallow
segmental arches. 7 windows to the 1st storey, one blocked,
the remainder simulated sashes with vertical glazing-bars
only. 4 similar windows to the right of the ground storey: 3
longer 12-pane sashes and a C20 plate-glass shop window to the
left of the entrance arch.
A large lucam-like dormer in the centre of the roof has
mock-timbering with herringbone brick infill, pierced and
fluted bargeboards, an ornate spike finial and a 2-light
4-paned casement window. 7 window range to College Street, on
the 1st and 2nd storeys in the same style as in Westgate
Street; 3 blocked windows on each storey. Two 12-pane sashes
to the ground storey.
Part of the College Street frontage, which is divided into 7
bays by plain pilasters, relates to a rear range, parallel to
the Westgate front and gabled to College Street: its altered
ground storey, formerly with a wide entry, is now infilled
with 3 windows. The 2nd storey of the gable is blank. Pierced
and fluted bargeboards to the roof.
INTERIOR: not inspected.