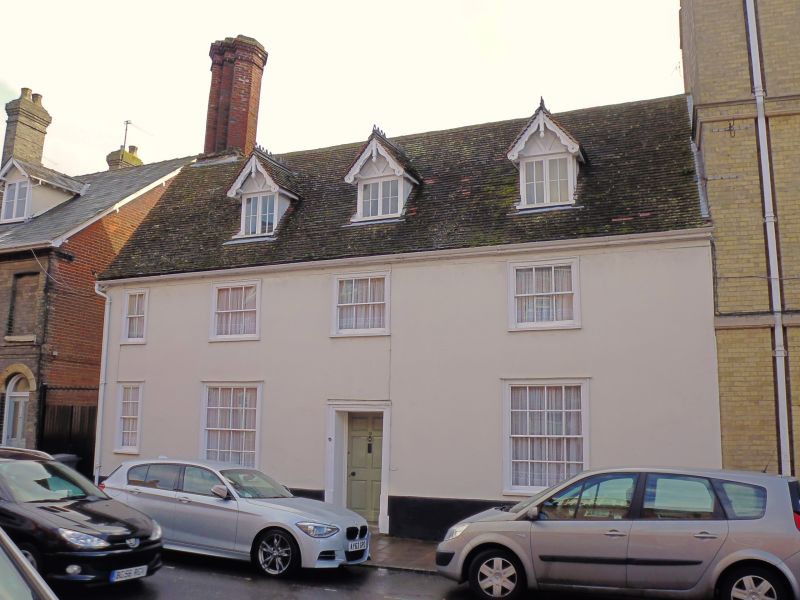 House. Later C17 with a C18 front. Timber-framed and rendered;
plaintiled roof.
EXTERIOR: 2 storeys, attics and cellars. 3 windows to the main
part of the front: 6-pane to the 1st storey and 16-pane to the
ground storey, all in flush cased frames; a narrow sash window
to each storey on the far left. 3 gabled dormers with 4-pane
2-light casement windows have pierced ornamental ridge tiles,
fluted bargeboards and hanging finials. A 6-panel door in deep
panelled reveals with a moulded architrave.
A tall red brick chimney-stack on the east side has 3 attached
hexagonal shafts and rebuilt corbelled caps. The rectangular
base is almost completely obscured by the ridge of the present
roof. Lean-to extensions and a wing at the rear.
INTERIOR: a large cellar with brick walling, some flint and
reused stone blocks. No framing exposed: all main beams boxed
in and fireplaces replaced. Thought to have been originally
jettied. Panelled internal shutters to the windows. The
entrance hall has a dado of Jacobean panelling uncovered
during restoration in the 1970s. Early C19 stair with stick
balusters and ramped handrail. Clasped purlins to the front
range of the roof.