Pump Engine House to Robinsons Shaft at South Crofty Mine 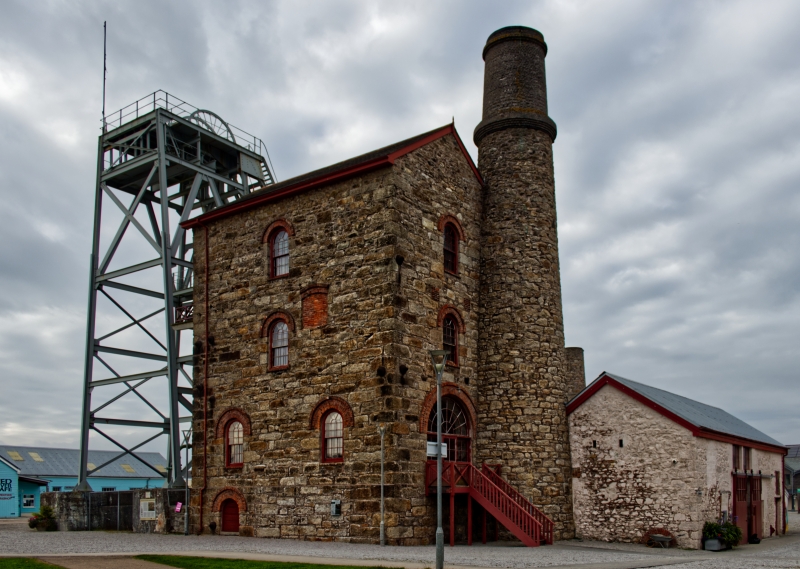 Pump engine house to tin mine. 1903, slightly altered. Uncoursed killas rubble with granite quoins, bob wall of large dressed granite blocks, window arches of brick, wooden shuttering to the bob opening, slate roof; brick upper stage to chimney. Rectangular plan on east-west axis, with bob wall to west, chimney attached at north-east corner adjacent to boiler house (qv). Three stages, with round-headed openings: the rear wall has a large raised cylinder doorway with central glazed and panelled door and matching side windows all under a semicircular fanlight with radiating glazing bars, one matching window on each floor above, and immediately to the right of the doorway the tapered cylindrical chimney stack with moulded brick cornice to the stone stage and cut-down brick stage also with a cornice; the south side wall has 2 similar windows at ground floor and one on each floor above, and there is a blocked segmental-headed window above and to the right of that at 1st floor; the north side has similar fenestration; the bob wall has a driver's window at ground floor and rectangular bob opening at the top from which the engine beam projects (though the former bob-plat has been removed). The interior is still fully equipped with 80-inch cylinder Cornish beam engine and all its associated controls, apparently in the condition in which it ceased working in 1955: the engine, which is dated 1854 and came from Tregurtha Downs Mine near Marazion, has a cast-iron cylinder base decorated with intersecting Gothic arcading, with a moulded cornice and short stout fluted "columns" surrounding the massive mounting bolts, and the beam has raised lettering: "SANDYS VIVIAN CO HAYLE 1854"; the staircase has a closed string and slender turned balusters. Apart from the missing bob-plat, an exceptionally complete survival of its type which is comparable only to the engine house at Taylor's Shaft, East Pool, Camborne and forms part of an exceptionally well-preserved group of mine buildings on this site .