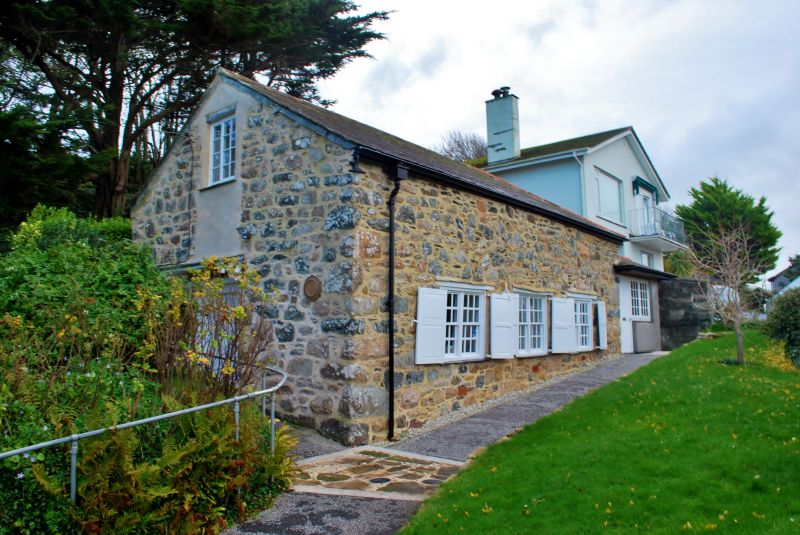 Quaker meeting house. Circa 1688 remodelled 1742 and circa 1880. Granite rubble
walls with some cob at the rear. Wooden lintels. Scantle slate roof, gabled to the north west, hipped to the south east.
PLAN: rectangular aisle-less plan with rostrum/pulpit at the east end and doorway
originally to middle of south wall (now window), but in the C19 a doorway was cut in
the middle of the west gable end. Probably originally there was a gallery at the
west end. C20 extension front.
EXTERIOR: Single storey. Symmetrical 3-window south front with probably 1742 paired
12-pane hornless sashes with wide internally ovolo moulded glazing bars and some
crown glass; in the former central doorway is C19 copy with thin glazing bars. C19
shutters with chamfered stiles and rails.
Left-hand gable end has central doorway with C19 4-panel door in bowtell-moulded
(possibly C18) frame and hood over carried on shaped brackets; above the doorway a
C19 12-pane 2-light casement.
INTERIOR: original rostrum with simple balustrade with splat column balusters with
ovolo moulded cornice to the handrail and to the square-on-plan newel posts with ball
finials; original settle with shaped ends behind and flanked by probably later
settles at lower level on either side. 1880 roof structure.
Cobbled path at the west end.

The plan of this meeting house is like the one at Come-to-Good (q.v.), Feock, and there
were probably many other similarities before the C19 alterations. The C18 sashes are
particularly notable and rare features.
Source: An Inventory of Non-Conformist Chapels, by Christopher Stell RCHM