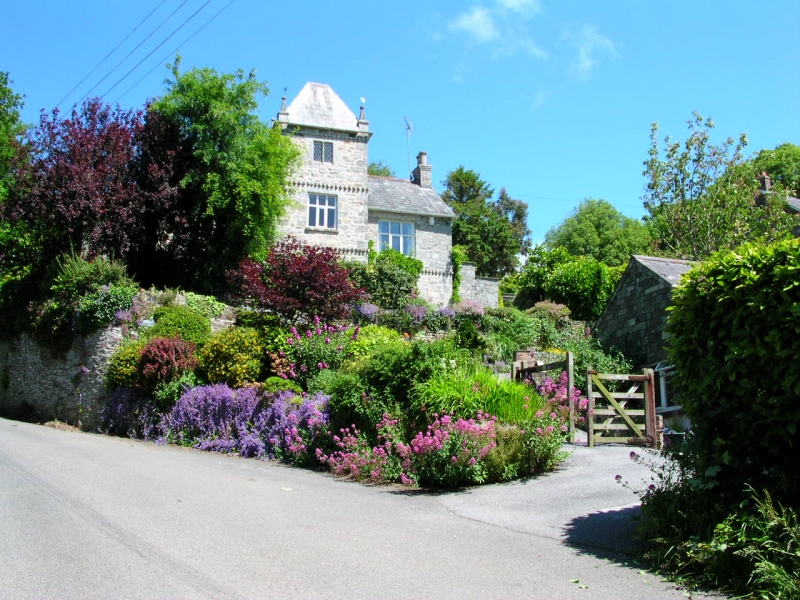 House. Dated 1871 said to be by William White; few later alterations. Slatestone
and granite rubble with granite and brick dressings. Slate roof with crested ridge
tiles and gable ends. Gable end stacks with brick shafts.
Plan: Large double depth plan, with central entrance through 3-storey porch tower.
There is a principal room to front left and right with central stair hall; rear left
is the drawing room, with a canted bay, rear centre and rear right service rooms.
Exterior: 2 storeys, symmetrical front with central 3-storey porch tower with
pyramidal roof and obelisk finials at the corners; this feature is probably copied
from Trewan Hall, where William White worked on the restoration. The first and
second floors of the house and porch tower have string course of brick forming a
chevron pattern. The porch has 4-centred arched doorway with plank double doors in a
diagonal pattern; bell-pull to right. Sides of porch have wooden mullion and transom
windows with brick voussoirs, second floor left side a single lancet. The inner
porch door is half-glazed with Gothic cranked head and chevrons around the panels.
Tile first floor has 3-light wooden mullion and transom window. Second floor has 2-
light chamfered granite window, with dated shield below the cill. Bay set back to
right and left, each with 3-light chamfered wooden mullion and transom window with
brick voussoirs at ground and first floor. The left side has blind gable end to the
front range. To left is a canted bay through 2 storeys on chamfered plinth with
string course and panelled parapet with coping; 3-light chamfered granite mullion and
transom window at ground and first floor, with sidelights. The front of the wing has
chamfered granite mullion and transom window at ground and first floors. The right
side has single storey late C19 addition with window and door. The right gable end
has 4-pane sash at ground and first floor and 2-light casement with row of pigeon
holes with brick perches. First floor left a 9-pane window. Front gable end has 2-
light casement at first floor. At the rear, there are two 4-pane sashes with brick
segmental arches and row of similar pigeon holes. The ground floor has two 2-light
casements.
Interior: The entrance hall a panelled ceiling, with chevron decoration. The stair
is straight, with moulded handrail and turned balusters which are probably a later
insertion. The newels are Gothic, and at the landing there is a panel balustrade
with pierced quatrefoils. At first floor all doors are Gothic panelled. The best
surviving room is to rear left, with complete panelling in Gothic style, dado with
chevron decoration, and a wooden chimneypiece with Gothic overmantel.