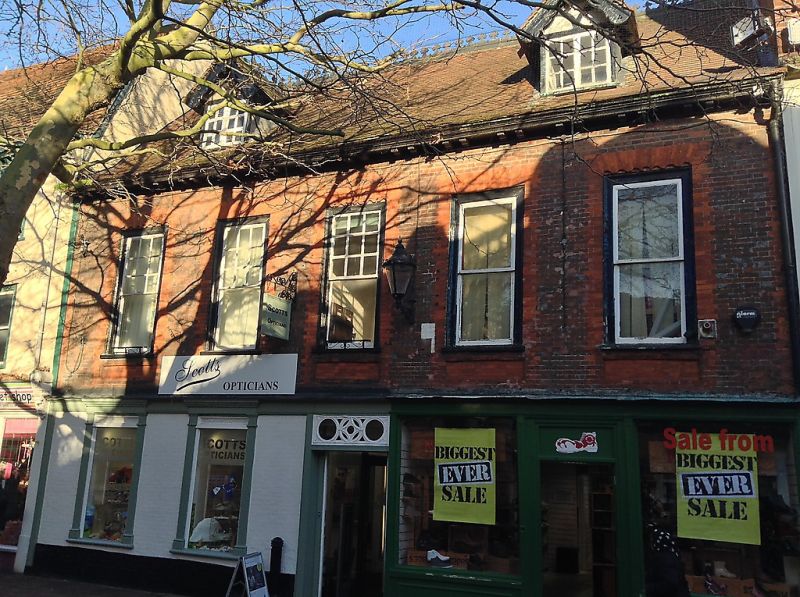 Entry Name: 4 and 4a, the Traverse

House, now divided into 2 shops. Late C16/early C17, with C18
front. Timber-framed; fronted in dark red brick with lighter
red brick dressings. Plaintiled roof with ornamental crest
tiles.
EXTERIOR: 2 storeys, attics and cellars. 5 window range: sash
windows in flush cased frames with flat gauged arches, 9 panes
to the top sashes of the 3 northern windows, the remainder
with plate glass. The arches above the 2 end windows and the
middle window have moulded soffits. A recessed panel below
each window. 2 gabled dormers with pierced and fluted C19
bargeboards have 2-light small-paned casement windows and mock
timbering in the apex of the gables.
The ground storey to No.4 has 2 C18 window surrounds with
fixed glass and a 6-panel door with an ornamental rectangular
fanlight. No.4A has a late C20 shop front.
The Skinner Street range, of 2 storeys and attics, is a C18
addition with the 1st and 2nd storeys faced in C19 white
brick. The overhanging attic storey has 2 rendered gables with
Edwardian mock-timbering, fluted bargeboards and ornamental
ridge tiles. 3 window range: 12-pane sashes in flush cased
frames.
On the ground storey, No.4 has an Edwardian cross window with
a flat gauged arch in red brick and No.4A a small-paned C19
shop window with pilasters and cornice flanked by a C20
half-glazed door and fanlight. Paired central 6-panel doors in
plain reveals have semicircular arched heads in red brick.
INTERIOR: cellar below No.4 has heavy chamfered main beams to
the ceiling of the front range and similar beams with very
heavy joists set on edge at the rear. The 2 halves of the
cellar are linked by a C17 doorway with moulded jambs. Below
No.4A the front cellar has a thick wall running through at
right angles to The Traverse with a wide low pointed arch.
Most of the walling is concealed, but one small section is of
ashlar blocks laid in regular courses. Below the Skinner
Street range is a single massive chamfered main beam. The
ground storey of the building, now divided into 2, is one
frame with 2 rooms along the street frontage, both with ovolo
moulded main beams. In No.4 the beams have additional applied
mouldings.
A C18 passageway through the middle of the house has been

removed. The Skinner Street range, added in the C18, contains
a fine dog-leg stair to No.4 with barley sugar twist
balusters, a wreathed and ramped handrail and a dado with sunk
panels.
The stair to the front attic has C18 vase-on-reel balusters,
probably reused. No features exposed in either front or rear
attics. The upper storeys of No.4A have been considerably
modernised.