A Grade I Listed Building in Lanhydrock, Cornwall 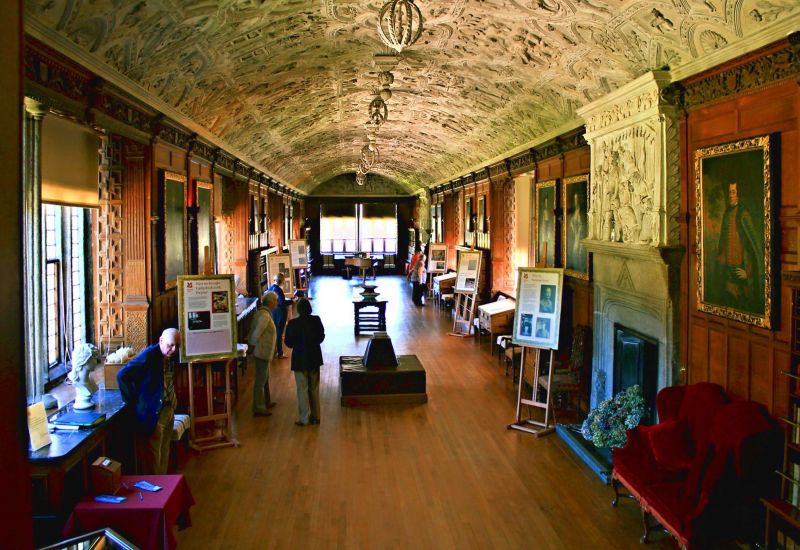 Country house. C17 on earlier foundation ; the north range dated 1636 ILR, for Lord
John Robartes. The house was mostly gutted by fire in 1881 ; rebuilt 1882, with only
the north range and part of the porch remaining from the original house. Granite
ashlar with granite dressings. Slate roofs with ridge tiles and gable ends ;
embattled parapet with obelisks with ball finials. Axial stacks in granite ashlar
with embattled cornices.
Plan: Of the original house, only the north range survives ; this is a wing of one
build, added in 1636, as a first floor hall with barrel-vaulted ceiling to the hall,
and heated from 2 lateral stacks on the inner side of the range. The house would
have formed a U-plan front, with central porch in the central range, which survives.
The house was rebuilt in the same U-plan form, with an extensive service block to
rear left. Detailed description of the plan of the C19 house in sources.
Exterior: 2 storeys, symmetrical front ; the west range has central 2-storey porch,
the north range projecting to right and the south range, a mirror-image, projecting
to left. Central symmetrical 4 bays with central porch tower. The porch has string
courses, embattled parapet with obelisks ; ground floor doorway with 4-centred arch,
roll-moulded, with recessed spandrels, hood mould with label stops ; fine door with
carved panels. Carved stone shield of arms inset above, with hood mould. First
floor has 2-light chamfered granite window with hood mould continued as string
course. Two 6-light granite mullioned windows to right and left at ground and first
floor.
The north range is 2-storey, with three 4-centred arched doorways, roll-moulded, with
carved spandrels and hood moulds, the one to left dated 1636, with panelled studded
doors to all. Four C19 granite mullioned windows at ground floor. First floor has
three 6-light C17 granite mullioned windows with king mullions, continuous hood
moulds and embattled parapet. The front gable end is concealed by the parapet ;
ground floor has C19 4-light chamfered granite window with king mullion. First floor
has similar C17 6-light window with stained glass of C17. The outer side of the wing
has 4 similar windows at first floor. Ground floor has C19 4-light windows, and 2
smaller 4-light windows which are possibly of C17. To end right, a 4-centred arched
roll-moulded doorway with recessed spandrels, hood mould with label stops ; fine
door, the upper part with carved arched panels. Similar small 4-light granite window
to right. To rear left, the service ranges, of 2 storeys with attic ; all windows
are in granite with mullions. Gabled dormers with scrolled kneelers. To rear, the
service range is in squared rubble with granite dressings.
Interior: The north range The rooms at ground floor have been altered in C19 and C20.
At first floor is the gallery, running the whole length of the range. The plaster
barrel ceiling was probably completed by 1642, and has 24 panels showing scenes from
the Old Testament ; almost certainly attributed to the Abbot family of Frithelstock
near Bideford. There are 2 granite fireplaces, contemporary, with basket arches,
roll-moulded with vestigial ogees and carved mantels, with plaster overmantels.
Panelling of C17, largely removed in C19 for bookcases. In the roof over the barrel
vault, the original trusses remain ; these are of the same date as the plasterwork,
the range having been built as a first floor hall. The trusses are not chamfered,
and have halved and pegged principal rafters with threaded purlins ; straight collars
and tie-beams, also halved and pegged.
The principal rooms in the C19 building have panelling, granite fireplaces and
plaster ceilings in Jacobean style. There is an unusually complete range of service
rooms ; for further information see sources.
Sources: Trinick, M.: Lanhydrock House 1986. Pevsner, N.: Buildings of England:
Cornwall 1970. Country Life: December 19th, 1903; Hellyer, A.G.L. March 5th 1970 and
Cornforth, J. February 23rd, 1978. Vernacular Buildings Survey, National Trust,
Lanhydrock.