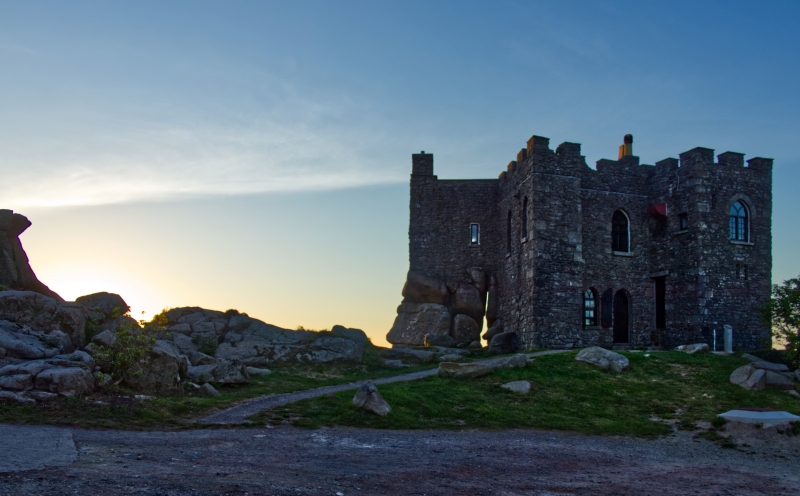 Hunting lodge or folly, now restaurant. Built by the Basset family of Tehidy,
mostly in C18 and C19, but incorporating some fabric believed to be medieval.
Uncoursed granite rubble with granite dressings, all on a very irregular
foundation of natural outcropping granite and boulders at the summit of the hill.
Irregular plan with 4 rectangular turrets round a core of the same height.
Gothick style, with mostly 2-centred arched openings and an embattled parapet.
Mostly 2 storeys; the entrance front on the south side has a narrow set-back
centre between 2 turrets, with a doorway to the right, a small window to the
left, and a window above the door; the right-hand turret has a raised square-
headed doorway in the re-entrant wall, a small square window above, and an
arched window at 1st floor of the front wall; the narrower left turret has 2
similar windows at 1st floor of the outer wall. To the rear of this a pile of
massive boulders forms the "ground floor" of the north-west turret, which is
perilously perched on it and has one small square-headed lancet at a high level
in each of its 3 sides, and flat coping with a chimney on the west side. To the
rear (i.e. north side) of this boulder outcrop a long flight of steps leads to a
doorway in the narrow re-entrant of the north-east turret, and the rear wall of
the core, which is exposed here, has a depressed 2-centred arch at the same
level, and some larger masonry which may be of earlier origin; the north side of
the north-east turret has 2 windows at (raised) ground floor and a small lancet
above, and the east side has a similar lancet at the upper level and a chimney
pipe rising from one upstand of the battlements. Interior not inspected. With
Dunstanville Memorial to west (q.v.), a very prominent landmark.