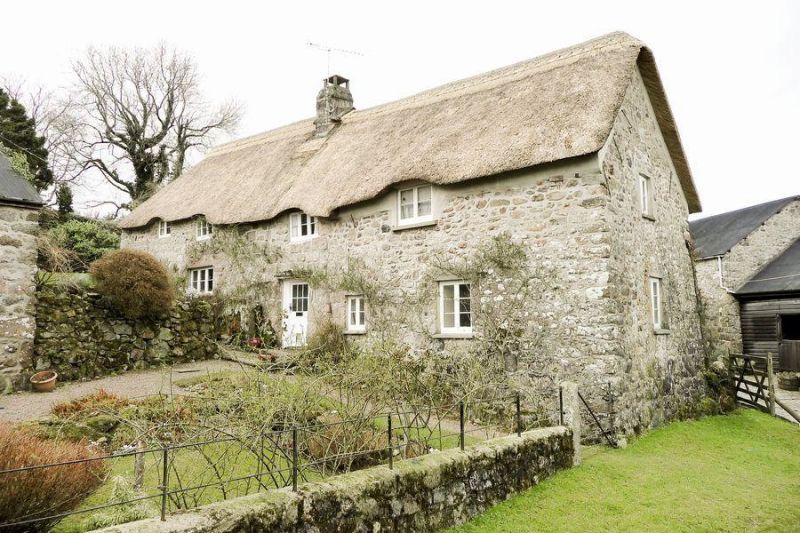 Farmhouse, former Dartmoor longhouse. Early or mid C16 with major later C16 and C17
improvements, renovated 1985 when shippon converted to domestic use. Largish coursed
blocks of granite ashlar with granite stone rubble patching, particularly at the
shippon end; granite hall stack with granite ashlar chimney shaft which has moulded
coping; thatch roof, replaced with corrugated iron over the shippon.
Plan and development: 3-room-and-through-passage plan former longhouse facing south-
east and built down the hillslope. The small and unheated inner room, probably once
a dairy, is terraced into the slope at the left (north-east) end. The hall has a
large axial stack backing onto the passage and there is an oak winder stair in the
hall alongside the passage. The shippon has a rear lateral stack inserted there in
1985.
Originally the hall at least was open to the roof and heated by an open hearth fire.
Through the late C16 and C17 the house was progressively floored over. The shippon
was converted to domestic use in 1985. Now 2 storeys throughout.
Exterior: irregular 4-window front of C19 and C20 casements with glazing bars, some
with exposed oak lintels. First floor windows have thatch eyebrows over and shippon
has a half dormer. Front passage doorway is roughly central and now contains a C20
door. Roof is half-hipped to left and gable ended to right. C20 windows inserted
both ends. Rear fenestration has similar arrangement to front.
Interior: contains features from all the main building phases. The oldest feature is
the hall roof. It is 2 bays and carried on an early C16 true cruck truss. At the
apex there is a small yoke (Alcock's apex type L1) but this does not directly carry
the ridge. Instead there is an inverted triangular blocking piece with a notch in
the flat top for the ridge. The truss is heavily smoke-blackened indicating that the
original house was open to the roof and heated by an open hearth fire. One suspects
that more of the house was open to the roof at this stage but it is not possible to
prove since the rest of the roof has been replaced with C18 and C19 A-frame trusses.
The hall fireplace is late C16-early C17; built of granite ashlar it is large with a
plain surround. At the upper end of the hall is a probably mid C17 oak plank-and-
muntin screen, the muntins given shallow mouldings. The axial joists over the small
inner room/dairy oversail the screen to produce an upper end jetty for the inner room
chamber. The hall was floored over in the mid or late C17 with an axial soffit-
chamfered beam. The oak winder stair in the hall may be as early as this. The
shippon end was much rebuilt circa 1985 and only one roughly-finished and waney
crossbeam predates this conversion.
Collihole Cottage is an attractive and interesting farmhouse, a former Dartmoor
longhouse with late medieval origins. It also forms part of an attractive group with
nearly Collihole Farmhouse (q.v.), its barn (q.v.) and their associated well heads
(q.v.).