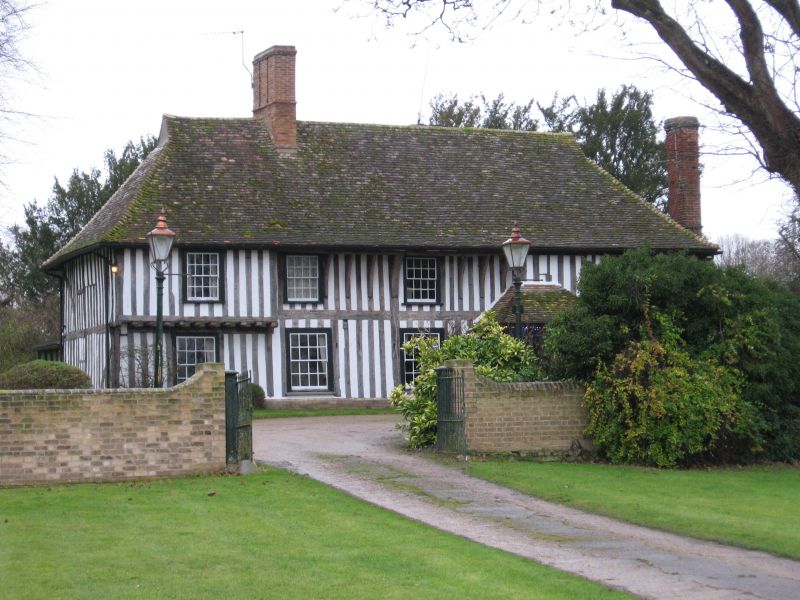 Manor house, built late C15, probably by Ingoldsthorpe family.
In late C16 or early C17 a stack and floor were inserted into
the open hall. The rear wing was built in 1967 and replaces one
added in C17. Timber framing exposed with heavy scantling and
close studding. The rear wall and right hand gable end are
plaster rendered. Plain tiled hipped roof with gables at each
end possibly for a smoke channel. The eaves project over the
two bays of the open hall and are carried on brackets which
replace the original. The ridge stack is of three linked
shafts, probably late C17. Plan of Wealden type with jettied
end bays. The total number of structural bays is five,
including the two bay hall and two bay service end, with its
cross-passage. Single bay parlour end to left hand. Two
storeys with the first floor of the service and parlour ends
jettied. The jetties are carried on joists with shaped ends and
there are six jetty brackets with chamfered edges each carried
on an original, attached, half-octagonal pilaster shaft with an
embattled capital. Four hung sashes, C20 to hall and two to
each end bay. In the hall, the peg holes in the wall frame may
be the site of an original oriel window. The doorway is in its
original location between the service end and hall and still
retains part of the original moulding to the architrave,
although the head has been cut down. The left hand gable has
curved downward bracing from posts to middle rail and sill. The
sites of three blocked windows are visible in this gable end,
including one with diamond mullions. There is a C19 cast iron
loggia at the rear of the house. Inside. The screen between
the service bay and the cross-passage has been removed but there
are vacant mortices in a joist indicating its original
location. Part of the ceiling was removed in this part of the
house when a staircase was inserted. The original partition
walls between service end and hall remain intact in the roof as
well as at ground and first floors. Similar partitions divide
the parlour from the hall at all floor levels. The display
truss over the hall has a double jowled head and a cambered tie
beam and peg holes for arch bracing from post to tie beam. The
roof is intact and is of clasped, through purlin construction
with rafters of large scantling and fine paired ogee braces from
the principals to the purlins. The purlins over the hall are
stop chamfered. Built on a moated site.