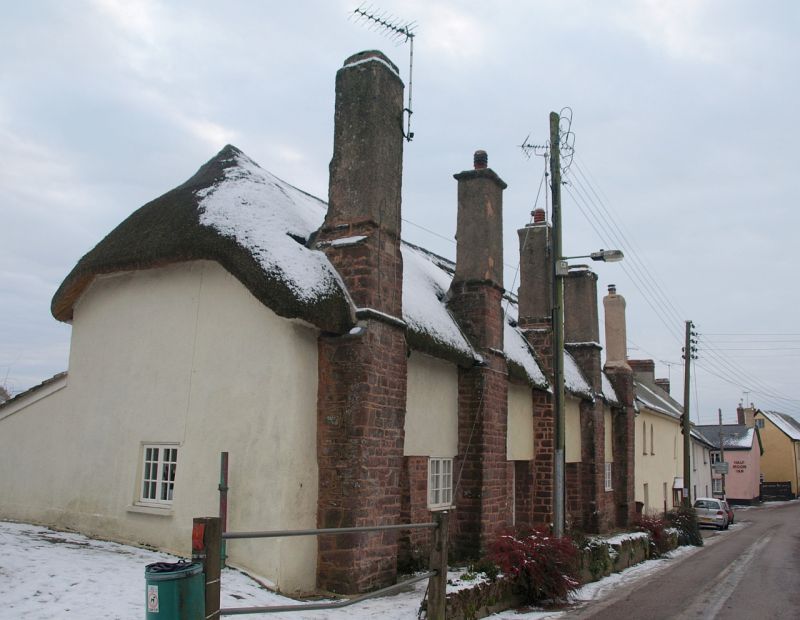 Plastered cob on exposed rubble footings to first floor level on low chamfered plinth; exposed volcanic stacks with blocks laid to rough courses and with chimney shafts of plastered brick; thatched roof. Originally a row of four one-room plan almshouses facing north-west and C19 one-room plan almshouse added to left (north-east) end. Each original almshouse has a front-projecting lateral stack with the site of the front door to left and back door opposite. The C19 addition was built in the same style but the doorway is placed right of the front-projecting lateral stack.

No. 1 at left (north-east) end now includes the C19 almshouse and the left of the original almshouses. No. 2 occupies the single original adjoining to the right and No. 3 takes the right (south-west) pair of originals. Two storeys. Overall five-window front of circa 1970 casements with glazing bars interrupted by the five stacks. The original stacks are not identical but all have a drip course at eaves level and the left-hand three have moulded volcanic coping under the C19 brick shafts. The C19 left end stack is built in the same style and includes a small Beer stone date plaque inscribed 1853 near the top. Although original disposition of doorways has been altered the blocked two show with straight joins below circa 1970 windows. Many of the casements replaced original mullioned windows with leaded glass.

Interior. Cob party walls but knocked through to create large ground floor rooms in Nos. 1 and 3. Plain carpentry detail to 1853 build. Originals all have oak axial beam with halved beams along front and rear walls. They are chamfered with late step stops. Fireplaces in front wall. No. 2 is volcanic ashlar with oak lintel and ovolo-moulded surround. No. 3 has two fireplaces, centre-wards almshouse has plain volcanic sides and ovolo-moulded oak lintel and end almshouse has volcanic ashlar hooded fireplace with ovolo-moulded surround (the oak lintel is mutilated). The latter has a stone oven in the centre of the pentan. Roof of purlins between cob crosswalls.