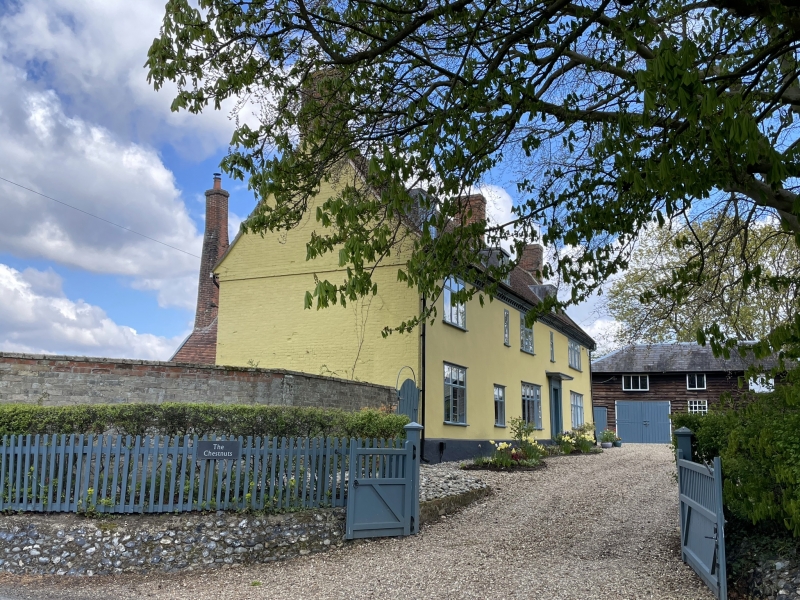 WALSHAM LE WILLOWS
THE STREET (NORTH SIDE)
The Chestnuts

House. Circa 1600 and early C18, with later extensions. Timber-framed and
rendered; old plaintiles; colour-washed brick gable-end on south with tumbling
to apex; complex rear. 2 storeys and attic to main range; 3-cell form. One
internal and 2 end chimney stacks, all with plain red brick shafts; modillion
cornice. 3 flat-headed C18 dormers with 2-light square-leaded casement
windows. Various casement windows, 2-light and 3-light, all with transomes,
some old; 2 single-light windows to the upper floor also. 6-panel door with
raised fielded panels, the top 2 glazed, in a moulded surround with flat
pediment. Interior in 2 distinct sections. To the right of the entrance
door, 2 bays of C16 timber-framing: boxed-in beam below, exposed studding
above, with slides for diamond-mullioned windows; roof with clasped purlins
and arched windbraces. The chimney-stack relating to this part was removed to
create an early C19 hallway and stair, and the present internal stack is a
smaller reconstruction using old bricks. A change in floor-levels and roof-
type marks the join with the remainder of the frame, an addition/part
replacement of the early C18. A section of splat balusters, presumably from
the original stair, reused for the back staircase; the main stair has stick
balusters and a wreathed handrail. 2 fine cast-iron grates have been brought
from elsewhere. On the rear wall at the left end, now enclosed by later
extensions, some good comb pargetting in panels. Roof over this part has
slightly stepped butt purlins. At rear, a small 1½-storey timber-framed and
rendered wing has an original 3-light early C18 casement window with transome,
pintle hinges and square leaded panes, now inside part of the rear extensions.
To the right of this wing (facing from rear), a single-storey brick and
rendered gabled wing with a very tall bottle-shaped end chimney-stack; to the
left a wide brick wing, formerly detached, now linked to the back wall. The
house is set sideways-on to the road.