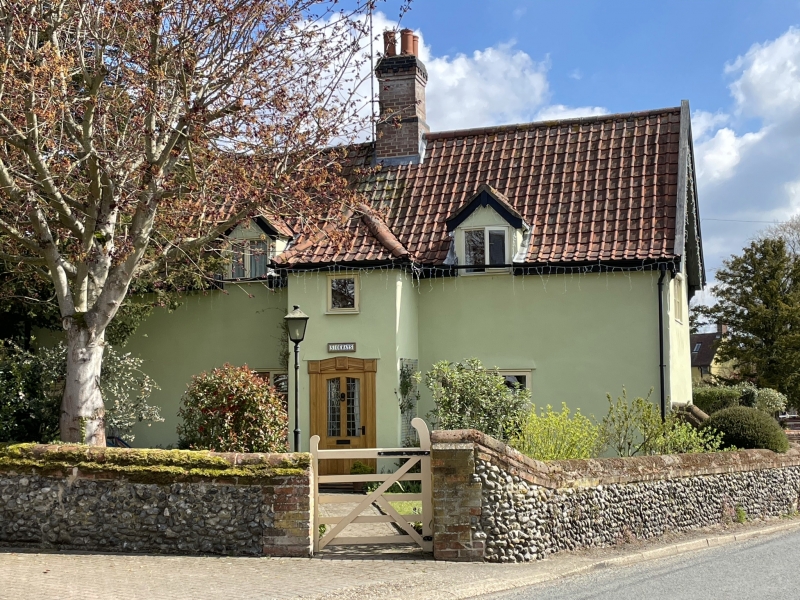 House. Mid C16, with later alterations and earlier fragments. Timber-framed
and rendered; panels of old comb-patterned pargetting on the rear wall;
pantiles. 1½ storeys; 3-cell form, with an added C18 single-storey lean-to on
the left gable end. An internal chimney-stack in 2 sections with a plain red
brick shaft. 2 gabled dormers with plain bargeboards and old 2-light casement
windows with a single bar to lights; 2 3-light casement windows on the ground
floor, each with 2 bars to lights; one 2-light window on the left. C17 1½-
storey entrance porch in a lobby-entrance position against the stack: a 2-
light old casement window to the upper floor, and a wide segmental-arched
entrance with panelled jambs and damaged keystone, into which a later half-
glazed door has been inserted. Timbers exposed inside: frame in 5 bays,
including a chimney-bay. To the right of stack, a 2-bay parlour with plain
unchamfered joists set flat and a chamfered main beam with curved step stops.
A straight flight of stairs has been inserted through the middle of the
chimney-stack. To the left of the stack, a 2-bay hall with chamfered joists,
and a main beam similar to that in the parlour; a very small service area
divided-off by a plank-and-muntin screen from which the planks have been cut
away within the last few years. It had 2 doorways, with arched heads, one
probably for a stair. This whole area has evidence of remodelling: the rear
wall was realigned outside the earlier wall in the C18, but the original sill
beam remains, with some studding, a main post, and some replacement brick
nogging. A corresponding main post, 'unrelated to the present ceiling, is in
the front wall, and both posts have empty mortices indicating a former
partition, possibly the original position of the plank-and-muntin screen, with
an open hall associated with it. The wallplates to this half of the house and
the roof timbers all date from the C18 alterations. The roof has poor
rafters, a ridge piece, and butt purlins. One original truss to the parlour
end against the right side of the stack has long pegged braces and wattle-and-
daub infill. The house is set sideways-on to the road.