A Grade I Listed Building in Great Coxwell, Faringdon, Oxfordshire 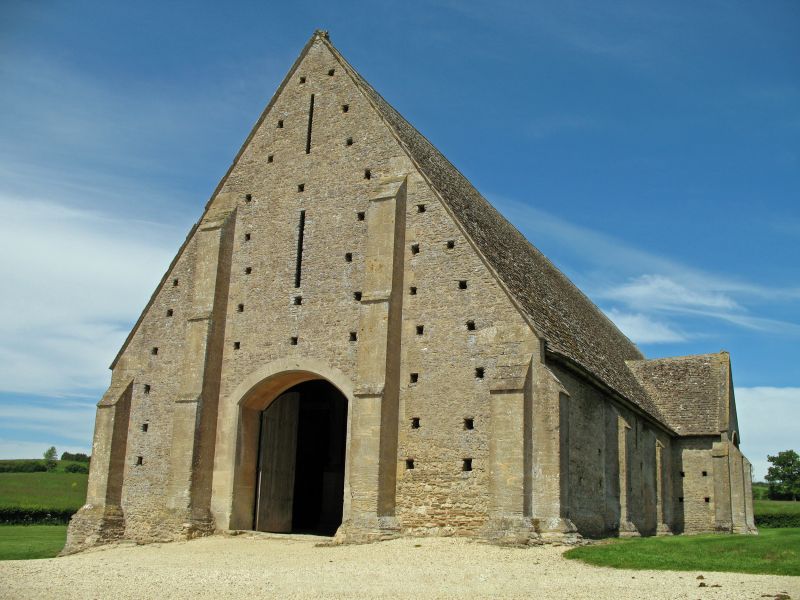 GREAT COXWELL
SU29SE The Great Barn (formerly
4/94 listed as "Great Barn,
21/11/66 Court House Farm".)
GV
I
Tithe barn. Circa early C13 for the Cistercian monks of Beaulieu Abbey,
Hants, who owned the manor. Restored in 1868 when many of roof trusses and
tie beams were either strengthened or replaced by deal beams, and again in
1960-2 by the National Trust when the barn was re-roofed in stone slates on
new rafters and some timbers were replaced by oak beams. Rubble stone with
dressed stone buttresses and openings, gabled stone tiled roofs with dressed
stone copings and decayed stone finials to gable ends. Cruciform in plan,
152ft 2ins x 43ft 10ins x 48ft to the ridge. The exterior walls have
shallow buttresses with set-off and splays at their bases and there are
segmental headed archways in each transept with 2 continuous chamfers. The
tall entrances to N and S gable ends are C18. The 7-bay interior is divided
into nave and aisles by massive roof-supporting trusses carried on 7ft stone
piers topped by oak templates. Heavy bracing struts project from the
trusses to support huge tie beams and further tension braces spring from the
plain and carved corbels on the side walls to support aisle tie beams. The
E transept is approx. 14ft x 4ft, but that to the W is three times as large
and has a pointed headed doorway with steps up to the right of the entrance
from the nave and was originally the double storied office of the monastic
official. Dated before 1250 by William Morris and dated circa 1230 by
recent historians on the stylistic similarity of the wall corbels to other
dated examples, particularly those at Rievaulx Abbey. Illustrated in
Murrary's Guide to Berkshire, 1949, plates 23-5; Walter Horn and Ernest
Born, The Barns of the Abbey of Beaulieu at its Granges of Great Coxwell and
Beaulieu St Leonards, 1965.