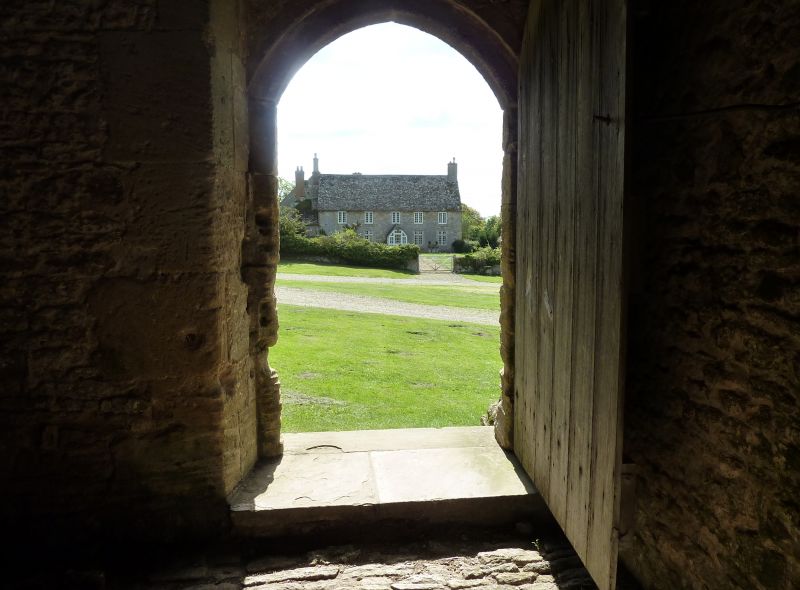 GREAT COXWELL
SU29SE
Court House Farmhouse
4/95
10/11/52
GV
II
Farmhouse. C16 core, altered in the C17, the C18 and extended in the C19.
Rubble stone and dressed stone quoins with a steeply pitched gabled stone
tiled roof and end stacks: the W stack of renewed stone, the E rising from
a stepped buttressed stone flue with a brick base and renewed stone top.
Possibly an original 'open hall' plan, floored and extended by a SE wing in
the C17 and given a SW wing in the C19. The N front is late C17 in
character of 2 storeys and 5 bays. The upper windows have large 2-light
casements but those on the ground floor are 4-light windows with stone ovolo
mullions and transomes with small- paned C18 wood lights. C20 glazed door
in plain glazed C19 porch. The S front has a further 3-light ogee mullioned
window on the SW at ground floor level and 2 others of 2 and 3 lights with
ovolo mullions and dripstones to the SE. The 2 S wings comprise a 2-storey
1-bay C19 range of rubble stone with a half hipped stone tiled roof to the
SW and a SE range of roughcast on rubble stone with a gabled stone tiled
roof in which there is another 3-light mullioned window. The S doorway is
placed centrally but enclosed within the C19 wing. It has a stone four-
centred arch with a single chamfer and gives onto a central passage which
has a heavy ceiling beam consisting of an ovolo, a cavetto and an ogee
moulding. Remains of the mediaeval roof timbering can be seen in the NE
bedroom where a truss, a collar and 2 wind braces are visible on the
underside of the roof. Probably on the site of the grange of Beaulieu
Abbey. The manor was held by Beaulieu Abbey from 1205, it was leased to
William Morys (Morris) in the early C16 and purchased from the Crown by
Thomas Morris in 1540. His descendant Francis Morris sheltered Edmund
Campion in the house in 1581.