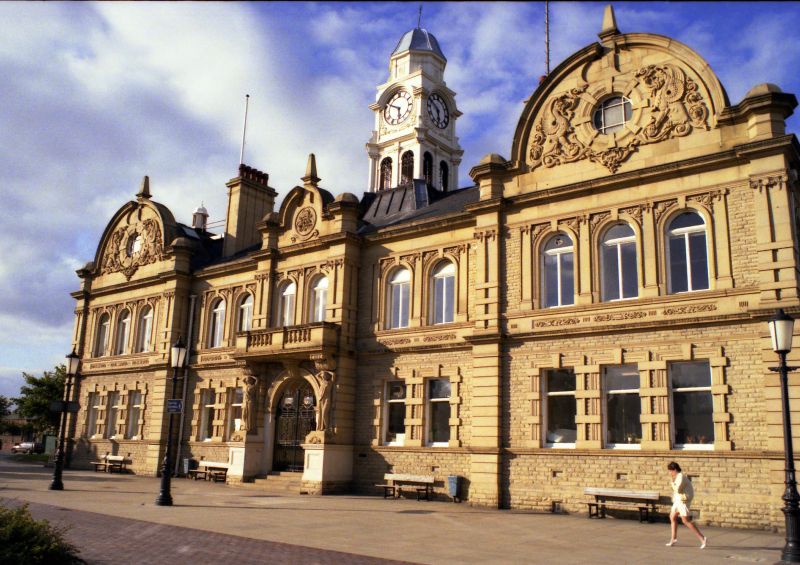 Town Hall. Dated 1906-8. Built at a cost of £23,000. Coursed, pitch-faced
stone with ashlar dressings and details. Welsh slate roof. 2 storeys.
Classical. A symmetrical facade of 3+2+2+2+3 bays in an ABCBA rhythm. Bays
A and C break forward slightly. Central round-arched portal with recessed
door and 'Art Nouveau' iron gates. The portal is flanked by caryatids
supporting foliated brackets which along with the arch keystone carry a small
1st-floor balcony. The caryatid bases are inscribed with the foundation date
and date of opening. (1906 and 1908). The arch spandrels are elaborately
carved with cartouches which bear the date AD and "1907". Bays A are
framed by rusticated pilaster buttresses which become paired Ionic pilasters
at lst-floor level. Similar pilasters frame bay C, 1st floor. Ten square-
headed ground-floor windows with rusticated surround. Twelve round-arched
1st-floor windows with ornamental spandrels framed and separated by Ionic
pilasters. Moulded sill bands. Moulded cornice and decorated frieze between
floors. Frieze and moulded eaves cornice. Surmounting bay C is a round
gable with octagonal flanking buttresses and central tapering finial. A
central roundel has relief carvings depicting the local industries: a hanging
ram, a wheatsheaf, a mill and a coal mine, and an inscription: "INUTILE UTILE
EX ARTE". Bays A are surmounted by similar but larger gables which both have
a central oculus supported by relief carvings of fire-breathing, crouching
dragons and with a grotesque mask below. Central clock tower in 2 stages
surmounted by an octagonal cupola with domed lead roof. The 1st stage has
paired round-arched openings. The second stage has a clock face to each side
with a cornice swept over. Symmetrically placed ornamental ashlar stacks.
The left return of 7 bays and right return of 5 bays, are similarly treated
but more plain. At the rear the public hall is a contemporary addition
treated more plainly with its gable front to the left return. It has a 3-
storey symmetrical front of 5 bays in an ABA arrangement framed and separated
by strips. The centre 3 bays break forward slightly and are pedimented and
the tympanum has a cartouche with the date 1907 supported by foliage.
Central portico with colonnettes supporting a pediment with "PUBLIC HALL" in
raised letters. Six high-level round-arched windows to left return of the
hall (ie rear of building).
Interior: mosaic entrance hall, tiled hallway. Dado of glazed tiling.
Stucco garlands to the frieze. Stair with 'Art Nouveau' ironwork. Stair
window with stained glass dated 1907. The council chamber, now offices, has
a panelled ceiling and stucco decoration. Interior of public hall has
unsupported horseshoe gallery with stucco decoration to front of cartouches
with rinceau support. Ornamental frieze and panelled ceiling. Panelled
wooden dado. Late C20 proscenium. The hall was designed to seat 800 people.