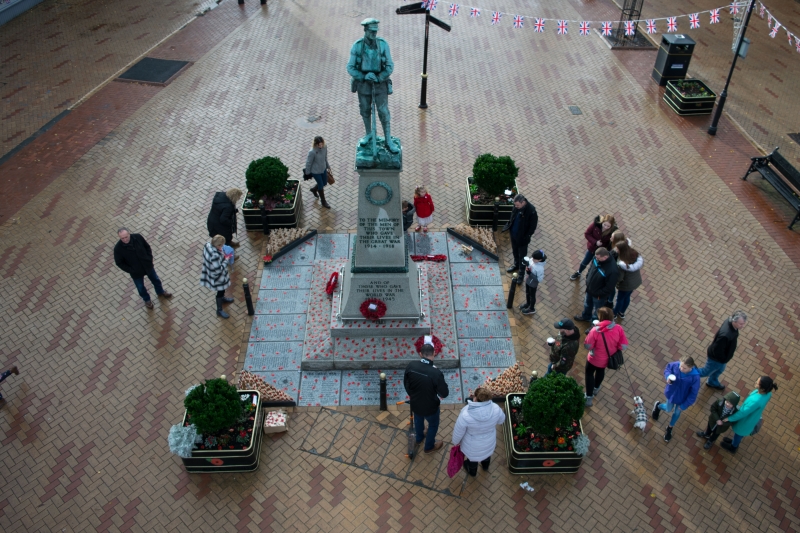 This list entry was subject to a Minor Enhancement on 17 May 2021 to amend the description, update the name, add a reference to selected source and to reformat the text to current standards

HISTORY
The aftermath of the First World War saw the biggest single wave of public commemoration ever with tens of thousands of memorials erected across England. This was the result of both the huge impact on communities of the loss of three quarters of a million British lives, and also the official policy of not repatriating the dead which meant that the memorials provided the main focus of the grief felt at this great loss. One such memorial was raised at Ossett as a permanent testament to the sacrifice made by men from the town who lost their lives in the First World War.

The memorial was designed by the borough surveyor Mr H Holmes and local architect Mr C Kendall. The life-sized bronze figure was sculpted by Mr R Lindsay Clark (who died before the unveiling) and cast by Walkers of Idle. The memorial originally stood on a traffic island at the east end of Kingsway near the town hall, with the statue facing east. It was unveiled in front of a large crowd on the afternoon of Armistice Sunday, 11 November 1928, by the Rt Hon the Lord Viscount Lascelles. On the day of the ceremony a procession took place, followed by the unveiling, a speech by Lord Lascelles and then the singing of hymns accompanied by the Ossett Military Band.

In 1954 the memorial was relocated to the south side of Kingsway, with the statue facing to the north-east, approximately 25 metres west of the town hall. It was listed in 1988, in that location. It was relocated again in 2001 to its present site, facing north-east towards the front of the town hall (National Heritage List for England – NHLE – entry 1184149). On 11 November 2018 the names of 315 fallen of the First World War and 85 fallen of the Second World War (including two women) were unveiled by children from the 11 Ossett schools, engraved on granite stones laid around the foot of the memorial. To these, a further seven names were added in November 2019; four from the First World War and three from the Second World War.

DESCRIPTION: facing the listed town hall from the centre of the market-place, in the heart of the Ossett Conservation Area.

The memorial comprises a life-size bronze figure of an infantryman, on a square grey granite obelisk with pedestal and two-stepped base. The lower step is rock-faced with a sloping top, while the upper step is polished with a flat top. The pedestal flares to a wide base and has a cavetto moulding where it meets the obelisk. The obelisk tapers, with a moulded capital on which the statue stands.

The statue is of a soldier wearing a cap, 1902 pattern service dress and 1908 pattern webbing, and ‘standing easy’ with both hands leaning on the muzzle of his rifle. Below the statue on the north-east face is a bronze laurel wreath above the inscription in raised lettering, TO THE MEMORY/ OF THE MEN OF/ THIS TOWN/ WHO GAVE/ THEIR LIVES IN/ THE GREAT WAR/ 1914-1918. Around the foot of the obelisk is a bronze laurel-leaf garland. The pedestal bears the inscription, AND OF/ THOSE WHO GAVE/ THEIR LIVES IN THE/ WORLD WAR/ 1939-1945.