A Grade II* Listed Building in Greetland and Stainland, Calderdale 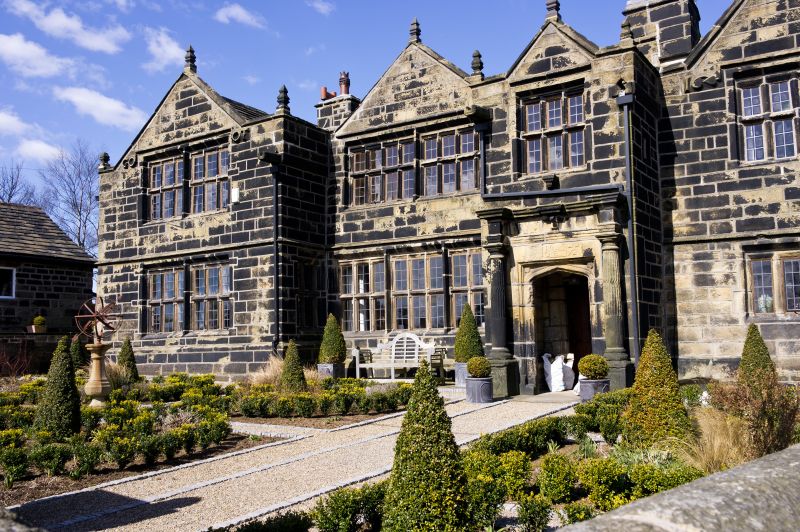 Right bay: basement (possibly originally a wool shop) has steps down to Tudor arched doorway on left of three-light window; single-chamfered three-light ground floor window; above, a five-light window under hoodmould with heart stops and date '16' '34'. Gables have moulded coping and finials. Corniced stack to ridge of left bay and double one between right-hand bays. Rear: main range: plinth and string continued.

Interior: central house body: the main feature is the Tudor-arched moulded ashlar fireplace with Carolean baluster-like motifs under stylised heads to jambs, heavily-moulded cornice, frieze reading 'FEARE'GOD HONOUR THE KINGE', moulded cornice and elaborate plaster overmantel with royal arms and wording 'DIEU ET MON DRO IT 1635 TG E' flanked by caryatids under grotesque heads, cherubs and the arms of the Bishops of Cantebury and Earls of Derby. Also noteworthy are the five Tudor-arched and basket-arched chamfered doorways and two six-panel doors with linenfold panelling; the frieze on two walls with cherubs, pregnant women over lions' heads and pomegranates; and the stop-chamfered spine-beams and moulded joists. In the left-hand room (parlour) are a square-headed fireplace with deep moulded lintel, the Royal arms (initialled (CR'), the Derby arms and other motifs above it, and stop-chamfered moulded spine-beams and joists. The room behind this (service room) has stop-chamfered spine-beams and joists. Stone stair. In Lower Old Hall Cottage (the kitchen) a large chamfered Tudor-arched fireplace. On first floor (of Hall) a stop-chamfered doorway to rear wing (blocked) and two other doorways, into the front left room which has a small Tudor-arched moulded fireplace with plasterwork of pomegranate tree above, and into the central room which has a chamfered Tudor-arched fireplace. Roof timbers not visible except for base of purlins.