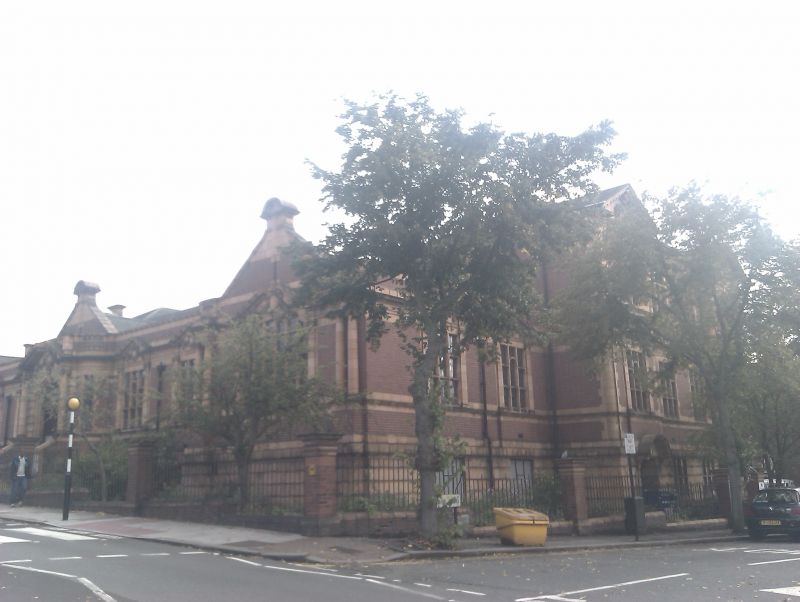 A large purpose-built library, with its gate piers and boundary walls, 1906, by Wakeford and Sons, and funded by Andrew Carnegie.

A large purpose-built library, with gate piers and boundary walls, of 1906 by Wakeford and Sons, and funded by Andrew Carnegie.

MATERIALS: the main elevations and boundary walls are constructed of red brick and faced in faience tiles, imitating ashlar, with terracotta dressings and mouldings. The roof is finished in Lakeland slate and copper. Internally there are timber fixtures and fittings.

PLAN: the building stands on a sloping corner site with the principal elevation facing north-east. It has an H-shaped plan with a central main entrance. The principal library rooms are on the first storey of the central section with storage below. The wings are of three storeys, and have separate entrances. The south-eastern wing has offices to the ground floor, and accommodation across the upper two storeys with private access. The north-western wing has plant rooms to ground floor, and offices on the upper two storeys. A separate lift* and stair service this wing.

EXTERIOR: the library consists of a central two-storey section, comprising a raised principal, library, floor above a semi-basement, flanked by three-storey pavilions on the return elevations, and is designed in Free Renaissance manner. It is faced in red brick in an English bond, and has swags and classical detailing in light brown terracotta. Windows are predominantly mullioned with transoms with rectangular leaded lights with floral pattern glazing. The principal elevation is symmetrical and of seven bays. The central bay has an elevated porch, reached by steps, with a broken pediment and a small segmental-headed gable above, which is flanked by a curved balustrade of vase balusters. The porch has two multi-paned metal windows, either side of two Ionic columns, and a central draped cartouche. The open entrance has a round-headed stone architrave with central keystone, projecting from a rusticated entrance. The outer door is a C20 metal sliding concertina type*, but has the original ornate metal overthrow above, bearing the name 'Carnegie Library' now painted in white. The projecting end pavilions are similarly pedimented, and have large, ornate, segmental-headed mullioned windows flanked by coupled Ionic columns. Other bays have square-headed mullion and transom windows with enriched, broken pediments, flanked by Ionic pilasters. The roof is shallow and finished in slate, behind a terracotta parapet. On the ridgeline are two octagonal, open-sided cupolas with bell-shaped roofs and tall finials.

The north-western elevation has six bays. The first two bays, which form the return of the pavilion, are two storeyed with ashlar style dressing to the ground floor. Each of these bays has a later C20 metal casement window to the ground floor and a square-headed mullioned window under a pediment to the first floor. The next four bays are of three storeys and are symmetrical, apart from an entrance offset to the left with a stone hoodmould above. Windows are either round or square-headed, with mullions and transomes mullions, and with rectangular leaded lights. The outlying two bays project and have pediments with swags in relief, the eaves projecting over deep modillion cornices. The south-eastern elevation is similar to the north-western but has twin central doors and simpler mullion and transom windows. The south-western rear elevation is more plain and also has some mullion and transom windows. The roof at the central rear is flat and punctuated by roof lights, and is hidden behind a brick parapet. Rainwater goods are cast iron and shallow chimneys project on gable ends.

INTERIOR: the entrance lobby to the former library has glazed brick walls and a black and white ceramic tile floor. The inner hall is defined by Tuscan pilasters, separated by tiled walls under a dado rail. There is also a rectangular leaded skylight with stained glass diamond and flower motifs set within a geometrically moulded ceiling. The three double entrance doors are painted timber, some panelled with ornate glazed upper panels, and with glazed margin panels; the doorcases are segmental headed with scrolled pediments and dentil cornices to the main doors, with overlights above, and have leaded glass with a tulip motif. Single doors, some set into original glazed partitions, have similar architraves. Mounted on the wall is a bronze commemorative panel to Carnegie which sits within a richly moulded mahogany cartouche. The floor is timber herringbone parquet, as it is throughout the main library.

The ground floor space of the main library to the rear is lavishly treated. The wide open space is supported by Ionic columns enriched with swagged garlands and with the addition of circular and rectangular skylights with C20 glass, set into a box-moulded ceiling. To the south of the lobby, there is some C20 division of the library using partition walls* and a metal and glass cubicle* has been added to the office area. The office has a single classically detailed fireplace surround with a cast iron inset, and a wall safe. To the north of the lobby there are smaller C20 office partitions*, and some doors have safety glass inserts*. Beyond the central library area to the south, there are two conference rooms with high ceilings and Tuscan pilasters, but plainer detailing. In the northern section, there are more large rooms of similar style to the southern section, but a later C20 lift* has been inserted. A stone stair with a tall straight steel balustrade and safety guard connects the floors of the northern section, and leads to the ground floor which has a terrazzo floor and passageways with tiled dados. The ground floor houses the entrance to the wing, utility rooms and a large store room.

SUBSIDIARY FEATURES: a low brick wall runs around the perimeter of the site on the north-western, north-eastern, and south-western sides. It has brick piers with moulded caps with terracotta copings, connected by later wrought irons railings.

The asset was previously listed twice also under List entry 1358273. The entry was removed from the List on 21 February 2017.

The Carnegie library at Herne Hill was designed by Wakeford and Sons, after a site was found, and a grant of £12,500 was awarded by Andrew Carnegie. A successful tender for £11,316 was accepted from Messrs Holliday and Greenwood, and the library was opened in 1906.

England's public library provision lagged behind other European countries in the first half of the C19, with only about 30 substantial free libraries in existence before 1850. A gradual expansion began following the Public Libraries and Museums Act (1850), which enabled towns above a certain size to levy a small rate for the development of library premises. Increased literacy in the wake of the Education Act (1870) meant a larger reading public, and the Libraries Act (1892), which made it easier for urban authorities to raise funds, provided a major boost to library provision. The other major source of funding came from philanthropists, the most significant of whom was the Scottish-American steel magnate, Andrew Carnegie (1835-1919). His enormous fortune helped to establish 2,800 libraries worldwide by the time of his death. Carnegie libraries, often rich in architectural display, became integral to the fabric of many of Britain’s urban centres. Most of these operated on the closed access system, whereby borrowers consulted a catalogue to select their books, which were handed to them by the librarian over a counter. This system was phased out by the 1930s. An important provision was a reading room for newspapers and magazines, and most libraries also had a reference room.

A map by John Rocque dated 1746 shows that Herne Hill was still very rural in the C18. Despite its proximity to the city of London It remained a largely affluent rural district of large mansions and gardens due to the lack of public transport to the city. Herne Hill’s tranquillity changed with the arrival of the railways in 1862, as smaller houses were built and the population grew rapidly to take advantage of cheap commuting to London. Trams were also introduced in 1884, and by the early 1900s they were electrified. From 1862 to 1901, the population doubled.

In 1901 the Lambeth Borough Librarian, F J Burgoyne, applied to Andrew Carnegie for financial help to build a library in the Herne Hill area and so complete the library system of the borough. The library was unusual in that it offered the public access to the books on shelves arranged in a sunray pattern in the main lending library room. In the late-C19, it was more usual for libraries to operate a closed system, whereby books were kept away from the public areas and delivered to the front desk on request. The library also had a Childrens' room with separate access, and two large rooms for magazines and newspapers. For the staff, there was a work room, mess room, strong room, and file room. There were also further public rooms on the upper floors, including a lecture theatre. Lady Durning Lawrence officially opened the library and it operated for 110 years until it was closed In 2016.

During operations as a library a lift has been added to the north-western wing, and some safety doors have been inserted across the building. In the central library section, some partitions have been added, and a cubicle inserted in to the library office. Some later C20 metal windows have been inserted on the ground floor, presumably to allow natural light to the basement. The former librarian’s accommodation is now (2016) in separate private occupation.

The Carnegie Library at Herne Hill, of 1906, with its gate piers and perimeter wall, and designed by Wakeford and Sons, is listed at Grade II, for the following principal reasons:
* Architectural interest: an ambitious design using a classical framework, with Tudor-like fenestration, and terracotta dressings. The interior is also well planned with light-filled spaces, and Edwardian decoration includes carved timber fixtures and leaded glass with floral motifs;
* Degree of survival: the library is almost unchanged externally, and the internal arrangement remains legible despite later, internal alterations which are largely reverisble;
* Historic interest: a large and impressive example of a Carnegie funded library, built at a time of rapid growth in Herne Hill, completing the provision of a library service across Lambeth, and providing an early example of an open-access service.