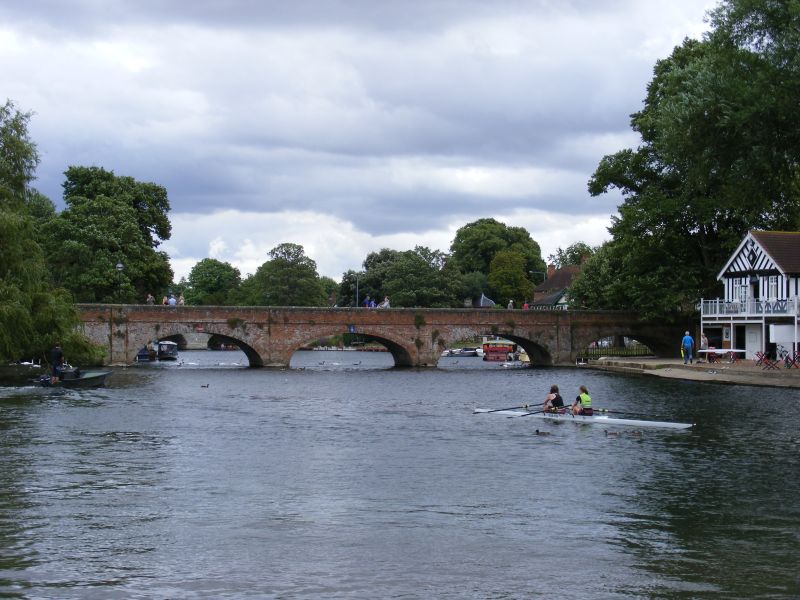 Tramway bridge, now footbridge. 1823 with later parapets. John
Rastrick, engineer; for Stratford and Moreton Tramway. Brick
with ashlar dressings. 8 elliptical arches, that to south east
end a flood arch, with piers on cutwaters to both sides.
Ashlar-coped brick parapets. Built to carry a horse tramway
from the Stratford Wharf to Moreton-in-Marsh. The tramway,
which was originally intended to be extended to London, had a
branch to Shipston-on-Stour. It was bought by the Oxford,
Worcester and Wolverhampton Railway in 1847 and closed, except
for the branch line, in 1881; details of history given on a
restored truck (not included) preserved approx. 60m to north
of bridge. The bridge is an important element in the landscape
around the Shakespeare Memorial Theatre.
(Fogg N: Stratford-upon-Avon: Portrait of a Town: Chichester:
1986-: 120-4, 156, 167N; Buildings of England: Pevsner N:
Warwickshire: Harmondsworth: 1966-: 416).