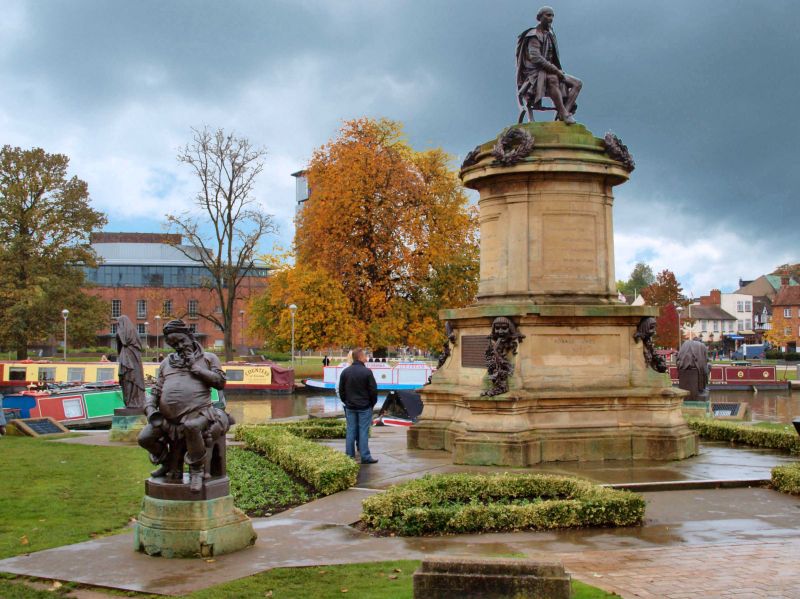 A bronze and stone sculptural monument of William Shakespeare and key characters from his plays, of 1876-1888 date, by Lord Ronald Gower and L. Madrassi.

A monument of 1876-1888 by Lord Ronald Gower with L. Madrassi, Tassel, Raux & Marley, and House of De Cauville & Perzinku. Original installation was carried out by Frederick Taylor, contractor, under the supervision of Peignet and Marnez, architects.

DESCRIPTION: a round pedestal on a square plinth, orientated approximately on a north/south orientation. There are four detached small plinths to the corners, each with a bronze figure of a Shakespearean character, and paved steps to the south. The plinths were placed closer to the monument at their former location.

At the apex, a figure of Shakespeare deep in thought is seated in casual pose and holding pen and scroll. The pedestal below has panels with inscribed quotations from Shakespeare between pilasters capped by bronze wreaths: [north face, from Henry V, Act 1, scene i] CONSIDERATION LIKE/ AN ANGEL CAME,/ AND WHIPT THE OFFENDING/ ADAM OUT OF HIM; [east, from Henry IV, Part 2 Act I, scene ii] I AM NOT ONLY WITTY IN/ MYSELF, BUT THE CAUSE/ THAT WIT IS IN OTHER MEN; [south, from Macbeth, Act V, scene v] LIFE’S BUT A WALKING SHADOW/ A POOR PLAYER/ THAT STRUTS AND FRETS/ HIS HOUR UPON THE STAGE/ AND THEN IS HEARD NO MORE; [west, from Hamlet, Act V, scene ii]GOOD NIGHT SWEET PRINCE/ AND FLIGHTS OF ANGELS/ SING THEE TO THY REST.

The plinth faces are also inscribed: [south] THIS MONUMENT/ WAS UNVEILED ON 10TH OF OCTOBER 1888/ BY LADY HODGSON WIFE OF SIR ARTHUR HODGSON KCMG/ IN THE FIFTH YEAR OF HIS MAYORALTY; [west] THIS MONUMENT/ WAS REMOVED FROM THE/ MEMORIAL THEATRE GARDENS/ TO THIS SITE IN THE YEAR/ 1933; [north] RONALD GOWER/ TO/ STRATFORD-UPON-AVON. A bronze plaque fixed to the south face reads: THESE FIGURES WERE DESIGNED AND MODELLED BY LORD RONALD GOWER, WHO/ PRESENTED THE MONUMENT TO THE TOWN OF STRATFORD-UPON-AVON IN 1888./ THE WORK WAS EXECUTED IN PARIS AND TOOK TWELVE YEARS TO COMPLETE./ ASSOCIATED WITH LORD RONALD IN HIS TASK WERE HIS ASSISTANT, MONSIOUR L. MADRASSI;/ THE FIRM OF TASSEL, WHO MADE ALL THE FIGURES SAVE THAT OF HAMLET, WHICH WAS/ ENTRUSTED TO MESSIEURS RAUX AND MARLEY; AND THE HOUSE OF DE CAUVILLE/ AND PERZINKU, WHO CAST THE WREATHS, THE MASKS, THE FRUIT AND THE FLOWERS./ THE STONE USED IN THE MONUMENT IS PARTLY BOXGROUD BATH, PARTLY YORK. THE GROUP/ WAS ERECTED ON ITS ORIGINAL SITE BY MR. FREDERICK TAYLOR, CONTRACTOR, UNDER THE SUPERVISION OF THE ARCHITECTS, MESSIEURS PEIGNIET AND MARNAY, OF PARIS.

The paths between the plinths and main monument, and the steps, are covered in York stone slabs. The steps are lined with low rubble stone walls. The four plinth statues are lit by floodlights set in the ground in concrete housing.

The monument was constructed in Paris over a 12 year period between 1876-1888 by Lord Ronald Gower and various associates and craftsman. It was unveiled at a ceremony attended by Oscar Wilde on 10 October 1888, at its original location in gardens to south of the Memorial Theatre. The monument was moved to its current location in 1933 following the rebuilding of the theatre after the devastating fire of 1926.

* Architectural and artistic interest: as a particularly important example of a Victorian public monument by Lord Gower and associates, in an individual and expressive style, displaying high quality sculptural detailing;
* Historic interest: as an important example of a monument celebrating the life and work of William Shakespeare, erected in 1888 in Stratford-upon-Avon, Shakespeare's place of birth, at a ceremony attended by Oscar Wilde;
* Group value: being situated in a particularly prominent position in Stratford-upon-Avon it has very strong group value with a number of listed buildings in the vicinity, particularly as part of the wider setting of the Shakespeare Memorial Theatre (Grade II*).