A Grade I Listed Building in Stratford-upon-Avon, Warwickshire 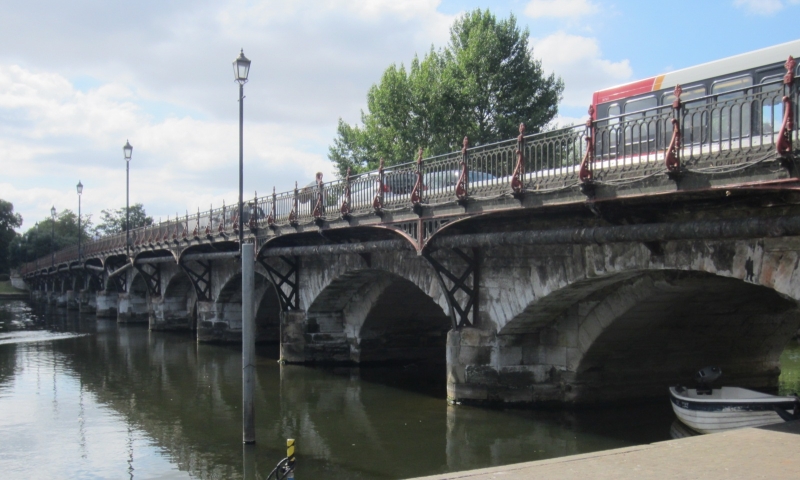 Bridge. c1484 with C16 and C17 repairs; widened and toll house
built 1814; footway added 1827; later parapets. For Sir Hugh
Clopton; footway by J Nicolls, made by the Eagle Foundry,
Birmingham.
Coursed squared stone and ashlar with cast-iron. 14 segmental
pointed arches with platt band and plain parapets over;
widened to north side, which has cutwaters. Cast-iron footway
to north side is cantilevered on lattice work brackets with
enriched spandrels; scrolled supports to posts, which support
panels of rails with semicircular links to head and foot.
10-sided toll house to south of west end has platt band and
crenellated parapet. Entrance, in porch to return, has
4-centred head and door of 4 arched panels, porch is
weather-boarded to return and rear. Windows have sills and
4-centred heads, most are blind, some have small-paned
casements of 2 pointed lights. Bell-form rainwater head.
The bridge was originally attached to a causeway to the west.
An important survival of a medieval bridge forming a
significant landscape feature. A Scheduled Ancient Monument.
(VCH: Styles P: The Borough of Stratford-upon-Avon and the
Parish of Alveston: London: 1946-: 9; Buildings of England:
Pevsner N: Warwickshire: Harmondsworth: 1966-: 416).