Dartmouth Castle and Gun Platforms to West and South 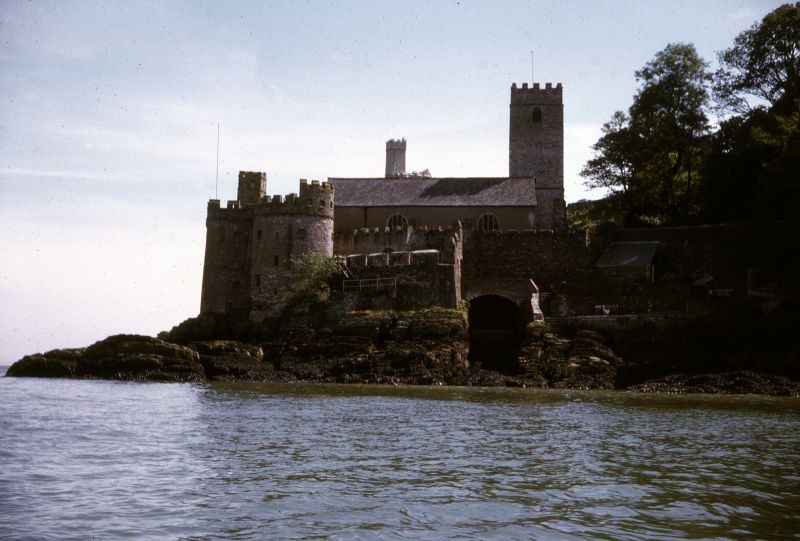 Castle with adjoining gun platforms. 1480-1494, with
successive later modernisations. Some local limestone, but
mostly slatestone rubble with red sandstone detail; lead roof.
PLAN: Double tower. Small round tower begun first or adapted
from C14 fortalice (qv). Square tower built alongside to
south-east and the 2 merged at a higher level. Round tower
received the Dartmouth end of a chain boom across the estuary,
the square tower contained the main armament. Barrack
accommodation on upper 2 floors with stair turret projecting
from the south side and rising to serve as a lookout. Open
batteries each side of the castle.
EXTERIOR: Basement level of square tower with 7 embrasures -
large rectangular ports close to water level (originally
shuttered externally). Loops for handguns as well as small
square-headed windows on the upper floors and provision for
more cannon on the flat roof. Crenellated parapet and
machicolations above the doorway (C20 but in original
position). Parapet has been raised on the landward side.
INTERIOR: Some alterations to floor levels. Rock-cut basement
of round tower has slots for pulley and holes in the rock,
probably for windlass for hauling the chain. Much of interior
carpentry has been renewed in the C20 but first-floor barracks
has large moulded crossbeams with runout stops (surely later
than the C15). Also a hooded fireplace and remains of another.
Each side of the castle are open batteries with thick
crenellated parapets, remodelled in the C18. Originally the
castle approach was from the north across a bridge (rebuilt)
across a chasm. C18 doorway through the curtain wall has brick
segmental arch and contains a fielded 6-panel doorway.
The castle and other nearby buildings make up an important
group at the mouth of the Dart valley. An important example of
a fort designed for artillery, earlier than the castles of
Henry VIII.
Scheduled Ancient Monument.
(Archaeologia: O'Neil BH St J: Dartmouth Castle and other
defences of Dartmouth Haven: 1935-: P.129-157; Saunders AD:
Dartmouth Castle, Devon: HMSO: 1986-).