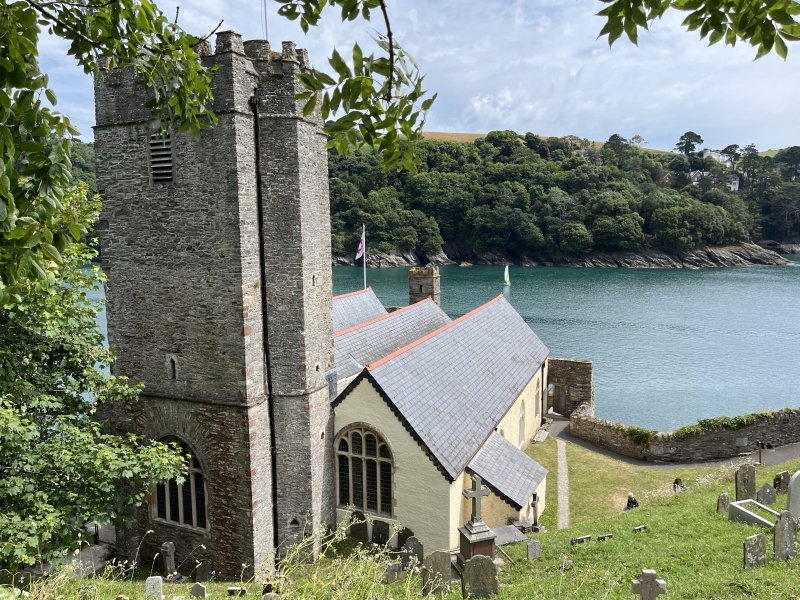 Parish church. Probably late C12 origins (Norman font),
rebuilt and enlarged in 1641 (date plaque). Local limestone
and slatestone rubble, mostly roughcast but exposed on west
end and tower; freestone detail; slate roof with crested ridge
tiles.
PLAN: Uninterrupted nave and chancel with full-length north
and south aisles, west tower, and small lean-to heated vestry
against west end of the south aisle.
EXTERIOR: Vaguely Perpendicular in style. Tower of 2 stages
with low offset buttresses, stair tower projecting from south
side to embattled parapet, arch-headed belfry windows and tiny
lancets to the ringing floor, 4-light west window and blocked
Tudor-arch doorway in the north side. Main doorway in west end
of north aisle, another Tudor-arch doorway under a very
weathered plaque from which only the 41 of the 1641 date is
legible. Panelled door, like those on the south side, appears
to be C19 but reusing older ferramenta. Window above has plain
mullions from a repair (another similar at east end of south
aisle). North side has 2 raking buttresses and a window each
end, and south side has 3 windows to right of the vestry; all
arch-headed mullioned-and-transomed 3-light without
hoodmoulds, with Tudor arch-headed lights. Larger 4-light
version at east end of north aisle. East window of chancel has
intersecting tracery.
INTERIOR: Uninterrupted nave and chancel. 4-bay arcades to
aisles on octagonal piers with plain moulded capitals. Plain
plastered barrel-vaulted ceilings. Tall plain tower arch and
large beams to the ringing floor. Tower walls of exposed
stone, the rest are plastered. Tower floor is an attractive
chequer pattern of red, black and cream tiles. Rest of the
church has a stone flag floor including good graveslabs and
brasses at chancel end (see memorials).
FITTINGS: C20 altar table and communion rail. Good C17 oak
pulpit - octagonal with panelled sides and dated 1641. Plain
C19 pine benches. West end of south aisle screened off by a
partition made up from pieces of C17 panelling, enriched with
guilloche, strapwork, cherubs, leafy scrolls, etc: these
fragments are probably from the C17 gallery (dismantled in
1885) as are the panelled sections of the gallery frontal with
similar ornament set in the tower and now used to commemorate
those parishioners who died in both World Wars. Good Norman
red sandstone font - circular stem and bowl with frieze of
palmette decoration. Painted arms of Charles II from 1660 on
south wall. North wall has painted boards recording charitable
bequests; the largest dated 1677, others from 1823 and 1841.
An arcade of round-headed boards at west end of the south
aisle from former reredos has taller outer boards painted with
the Lords Prayer and the Creed with biblical quotations
between.
MEMORIALS: two C18 funeral hatchments of the Holdsworth
family. Floor includes good collection of mostly C17 and C18
ledger stones, many of them for members of the Newman and
Holdsworth families. A row of 3 good brasses to right of the
altar - best one in memory of John Roope (died 1609), others
to Dorothy Rous (died 1617) and Barbara Plumleigh (died 1610).
Best, if somewhat worn, mural monument is reset at east end of
south aisle, to Edward Roope (died 1683) - oval plaque with
bayleaf frame, pulvinated frieze on Corinthian columns over
carved console brackets. Each aisle has a similar small,
delicately carved and pedimented plaque, one to Nicholas Roope
(died 1625), the other to Margaret Plumleigh (died 1638).
GLASS: All late C19 and early C20 dates, but probably
including earlier glass. Mostly plain patterns of leaded glass
with coats of arms but stained glass from 1927 in east window.
The church forms part of an important group of listed
buildings at the mouth of the Dart estuary. The church
probably originated as a light positioned at the harbour
entrance.
Scheduled Ancient Monument.
(Russell, Percy: The Story of St Petrox Church - church
guide).