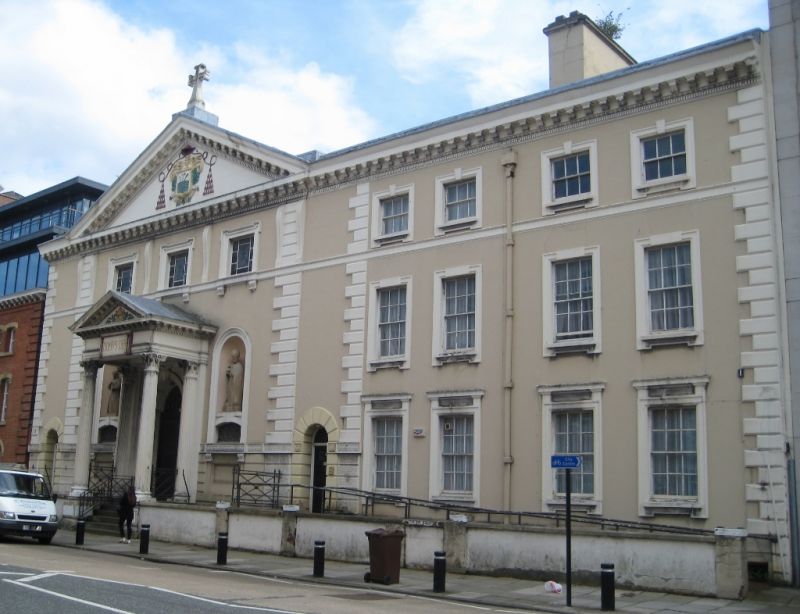 PLAN: the church faces south rather than west, but all references here follow conventional liturgical orientation. The church has a broad nave with narrow side aisles. The nave has a west gallery and is almost a single body with the square ended chancel to the east. The south aisle has a side chapel at the east end and a small Lady Chapel projecting to the south. The presbytery is attached to the south of the west end.

EXTERIOR: the church has a five bay front defined by quoins, the pedimented central three bays also being quoined. The large central door is set in the round-arched, embellished doorcase. This is protected by a large, pedimented and Corinthian columned porch which projects from the centre, the porch being flanked by round arched niches containing statues of St Charles Borromeo and St Margaret Clitherow which are set above low, segmentally-arched windows. The side bays are blind except for domestic sized doorways set in round-arched rusticated door cases. The church’s façade is unified by a guilloche band set at cill level for the niches, this being at impost level for the flanking doorways. Below this, the stucco is channelled and the quoins are vermiculated, with the walls to the basement below street level being plain rendered. The church’s façade is unified with that of the presbytery to the south with a cill band which is at first floor level for the church, but at second floor level for the presbytery. The three windows to the church above this band have eared architraves and stained glass with broad margin glazing. The frieze to the porch carries the inscription DOMVS DEI, with the Papal insignia in coloured relief set in the tympanum. The church’s pediment has a stone cross finial and, within its tympanum, a coat of arms beneath a cardinal’s “galero”.

The presbytery is of three storeys, topped by a large central ridge stack. The presbytery’s dentillated and enriched eaves cornice is continuous with that of the church to the left. It is of four bays with a central rainwater downpipe and rusticated quoining to the right. Windows have moulded surrounds, of a different design to each floor, and retain hornless sashes, 6-over-6 to the ground and first floors, 3-over-3 to the top floor. Entrance to the presbytery is via the side door to the church.

Other external elevations of both the church and presbytery either directly abut neighbouring buildings or are of functional appearance. Permission to raise the side aisle roofs was granted in 2014.
INTERIOR: the interior of the church is richly embellished with mouldings, only a small proportion being described below, much of it picked out with gold leaf and multi-coloured paintwork. Areas of plain plaster are generally painted to imitate marble.

Chancel: this is lit from above via the glazed lantern rising from the dome high above the altar and is defined from the nave by a pair of embellished Corinthian columns that support draped female figures that form part of the arch bracing to the ceiling. The reredos includes a crested, segmental pediment on scrolled brackets, all flanked by paired, fluted Ionic demi-columns that support a rich entablature. Rising above this is a painted, sculptured scene of the Holy Trinity showing a globe set in billowing clouds with angels, with the Holy Spirit descending as a dove from a glory, flanked by Christ and God the Father who are both casually seated on top of the entablature. Above all of this is a painted fresco showing the Last Judgement, with further pictorial frescos embellishing the panels and vaults rising to the dome, as well as the dome itself. Flanking the altarpiece to both the rear and sides of the chancel there are ornate niches with canopies and pedestals, each niche with an almost life-sized painted sculpture of a saint or martyr. Above, inscribed in a frieze, is the text “THEY SHALL MAKE ME A SANCTUARY” and “I WILL DWELL IN THE MIDST OF THEM”.

Nave: is of three bays formed with ornamented round arches supported on paired Ionic columns that flank broad piers. Each of the piers has a pair of highly ornamented pilasters that frame a niche with a statue with a fresco above. The pilasters support an entablature that extends into a fourth bay occupied by the western gallery. Above is the clerestory which has two segmentally headed windows per bay, the windows being square with margin glazing. Between the windows are relief panels set between them. The ornate ceiling has broad, panelled borders flanking a central, coffered barrel vault supported by king posts with scroll brackets rising from cross beams.

West end: has a full-width gallery supported on cast-iron posts with traceried brackets. The gallery front is panelled and has painted decoration. On the north side of the gallery is an organ. Beneath the gallery there is a canted, part-glazed, timber internal porch.

North aisle: has a panelled, coved ceiling, with pilastered walls with a double cornice and a dado. Below the dado rail the walls are painted in imitation of multi-coloured marble panelling, above the walls imitate marble ashlar. The east end has a fielded 8-panel door and above it a segment-headed stained-glass window with an enriched surround. The west end has a pair of doors with stained glass panels.

South aisle: is similar to the north aisle but in addition has high-level stained-glass windows set in eared architraves, doors to a vestry, a small projection forming a Lady Chapel, statues both in a niche and set on a bracket as well as three sets of canted, timber panelled confessionals. At the east end, instead of a doorway and window there is a narrow side chapel to the Sacred Heart.

Sacred Heart Chapel: has a dome with skylight, with a half-domed apse beyond that is filled by the altar supporting a figure of the Sacred Heart with a fresco of attendant angels on the wall behind. Further frescos adorn the upper wall panels and domes. The chapel is framed by Corinthian pilasters.

Lady Chapel: this is in the form of an apse projecting south from the south wall of the church, framed by a moulded arch rising from engaged Ionic columns. It is top lit by a lantern-dome, and has a marble altar with a figure of Our Lady and Child above. The walls are richly finished with mosaic, frescos and pained mouldings.

Crypt: this extends beneath the approximate footprint of the church and consists of brick vaulted passages flanked by ossuary chambers which are now sealed. The crypt is not ornamented, but includes some memorial stones.

Presbytery: has been formed by modifying a pair of early C19 town houses. These retain some original period features, the best survival being within the disused basement rooms.

FITTINGS: include marble altars, the High Altar featuring scenes from the life of St Charles Borromeo; an ornate octagonal timber pulpit with painted panels depicting saints, with a suspended canopy above forming a sound board; a carved stone font that, in comparison with the rest of the church, is relatively modestly ornamented; a seated statue of St Charles Borromeo set on a pedestal; and a triptych war memorial panel listing the dead of the First and Second World Wars flanking an icon of the Our Lady and Child.

SUBSIDIARY ITEMS: the church and presbytery are separated from the street by a rendered and coped boundary wall topped with iron lattice railings with lattice piers. Similarly ornamented iron grills protect the light-wells to the basement. The metal ramp behind the boundary wall that leads to the right side door was installed after 2014.

This List entry has been amended to add the source for War Memorials Online. This source was not used in the compilation of this List entry but is added here as a guide for further reading, 29 August 2017.

The church of St Charles Borromeo opened on 29 July 1829, instigated by Father John Smith and designed by the local architect John Earle, the foundation stone having been laid the previous November. The new church was considered to be too plain and the London-based Catholic architect Joseph John Scoles was commissioned to alter and widen the church which was re-opened in May 1835. In 1894 the local firm of Smith, Brodrick and Lowther re-modelled the exterior, adding the grand pedimented porch, side aisles and two chapels, along with a dome above the High Altar. The front elevation of the presbytery may also have been remodelled into its current form at this time. The interior was given an elaborate Italian Baroque, Austrian Rococo influenced decorative overlay described by Christopher Martin (2006) as being “one of the most opulent and dramatic interiors of any C19 church in England”. This includes work by an Austrian craftsman Heinrich Immenkamp who was a local resident and fibrous plasterwork supplied by George Jackson and Son of London.

The main body of the church, including the clerestory windows and the gallery, dates to 1829. The street elevation of the church (the conventional west end which actually faces south) is considered to be mainly the product of the 1835 enlargement by Scoles, and is depicted, complete with its statue filled niches, cross finial and decorated tympanum in a sketch by Greenwood in 1835. This sketch shows the presbytery with an unembellished facade, although the text accompanying the sketch indicates that Scoles alterations were at that time incomplete. It is thus not known if the front elevation of the presbytery was remodelled by Scoles, or if it was later, perhaps when Smith, Brodrick and Lowther added the porch to the church in 1894.

Internally the High Altar dates to the 1870s and is possibly by Edward Simpson. The reredos, incorporating paired Greek Ionic columns, dates to 1835, although the plaster figures seated above are part of the 1894 decorative scheme. The fresco of the Last Judgement above the High Altar depicts a man being selected for heaven and another for hell: parish legend has it that the former depicts the parish priest of the time, with the latter being a caricature of one of the church’s neighbours who was rather disagreeable.

Roman Catholic church of St Charles Borromeo, with adjoining presbytery, is designated at Grade I for the following principal reasons:
* Interior decoration: one of the most opulent and dramatic interiors of any C19 church in England and a nationally highly unusual example of Italian Baroque and Austrian Rococo styling;
* Historic interest: started in the year before the 1829 Roman Catholic Relief Act, aggrandised in 1835 and opulently remodelled 1894, the church charts the development of Roman Catholic confidence in a city which saw the destruction of the first, very modest, catholic chapel in the 1780 Gordon Riots;
* Architectural interest: for its well detailed and proportioned Classical Revival frontage to the church and presbytery.