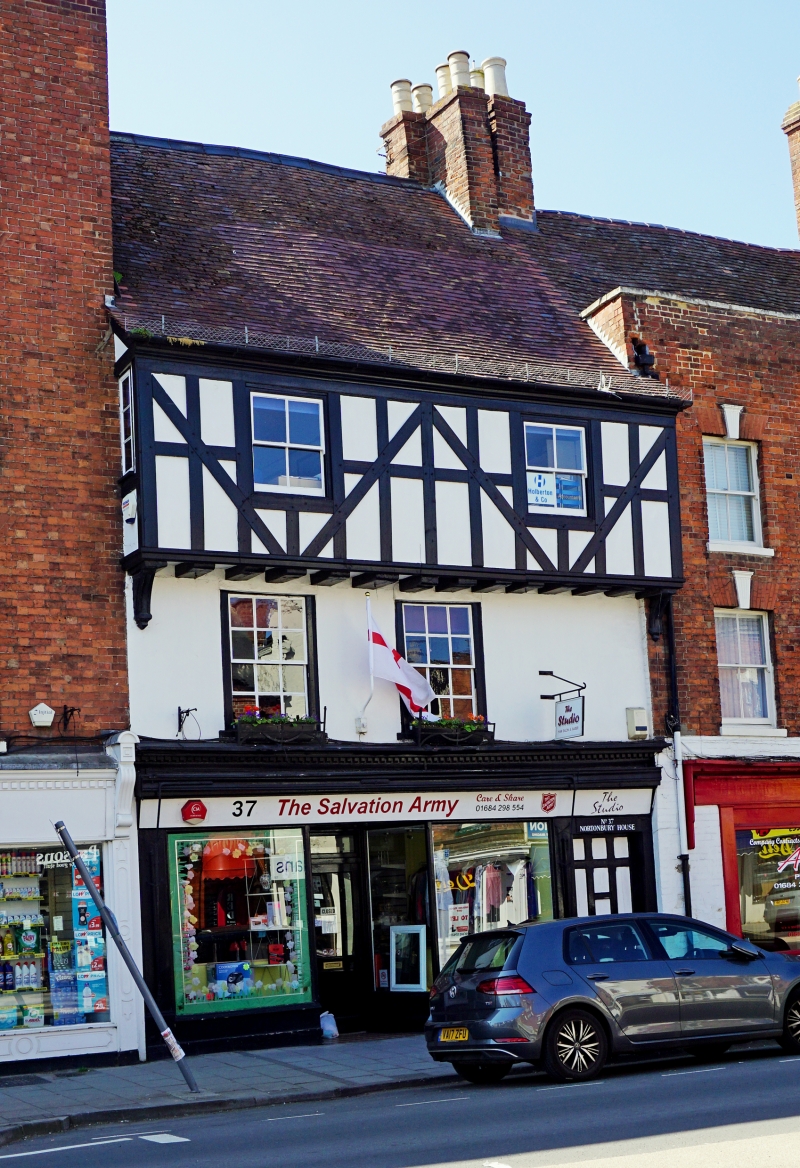 House in row. C16. Braced timber-framing with plaster panels,
some brick nogging, tile roof, brick stacks.
PLAN: side-entry parallel plan, with rear wing making L plan.
The 3-storey street front is twice jettied, with roof parallel
to street. To the right is a throughway which gives to a long
3-storey wing in square panel framing, including the separate
Nortonbury Cottage.
EXTERIOR: the front block has a side entry. 3 storeys,
2-windowed. Second floor has 2 wide-spaced 4-pane sashes in
replica framing with a small single light in each of the
returns where the jettying projects beyond the adjacent
buildings. At first floor are two 12-pane sashes, offset to
the left in plastered walling; there is no window above the
throughway.
The ground floor has a late C19 shop front with deep recessed
glazed door to plain transom-light and with slender mullions.
The fascia with dentil cornice is full width, covering also
the throughway, which has a 9-panel framed door. The upper
jetty has exposed joist ends, and is carried on 2 decorative
consoles.
Roof very steep, with a brick stack at the ridge to the right.
The throughway is crossed by 2 heavy square beams, and there
is a large jowelled post just inside the doorway. Approx 3m
back from the door there is a broad low arch, and a panelled
door gives entry to the ground floor of the front block. The
back wall has some timber-framing.
Nortonbury Cottage has plastered panels and a tile roof, with
large ridge stack. It is in 3 storeys with various windows
including some 12-pane sashes,and a part-glazed C19 door under
a heavy moulded early C18 pediment on consoles.
INTERIOR: at the ground floor the rear room has an C18 fire
surround with eared moulded architrave, and the wing has a
series of heavy transverse beams on posts at regular
intervals. To the N is a good 12-pane and to the S a 16-pane
sash. The mid stair is a tight early C18 open well with square
newels and drops, turned balusters and solid moulded string
and with laylight above; the bottom flight has been replaced
out of character with the remainder.
The principal corner posts are very large, to jowelled heads.
There are various C18 two- and 3-panel fielded doors, and much
heavy braced framing is exposed; at the top level, S party
wall, a major brace has been cut through to insert a small
lateral light. Second floor originally open to roof (not
accessible)
Nortonbury Cottage, to judge from the quality of structural
members, was a service or storage wing to Nortonbury House,
but now serves as a separate cottage. The ground floor has a
large bressumer fire to an C18 brick stack. At the first floor
lateral beams are on haunched posts, and the early joists are
roughly finished. There is a wind-brace to each slope in one
bay of the roof, which has a clasped purlin.
Nortonbury is the name used by Mrs Craik for Tewkesbury in
'John Halifax, Gentleman'(1857).